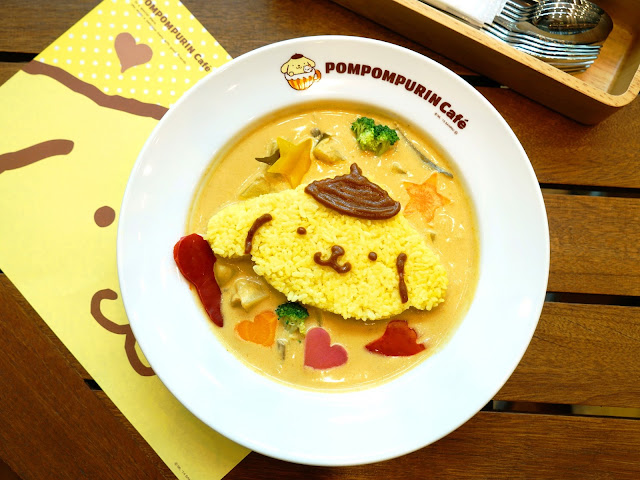 One doesn't need to be a dog lover to be attracted to the cuteness of Pompompurin! Kawaii!!! かわいい!!!

The good-natured yellow golden retriever dog character with its trademark brown beret by Sanrio might not be as famous as its counterparts like Hello Kitty, My Melody or Little Twin Stars, but look at its impossibly huggable appearance which coo "I'm just as adorable too!" Awwwwwwwww! XOXO

Pompompurin is actually very popular in its homeland Japan. It won 1st place in Sanrio Character ranking for 2015, and even has its own Facebook page! To have cafés dedicated to this cutie doggy is just a matter of time.

After Japan, Taiwan and Hong Kong, Singapore is the next country to play host to Pompompurin Café. 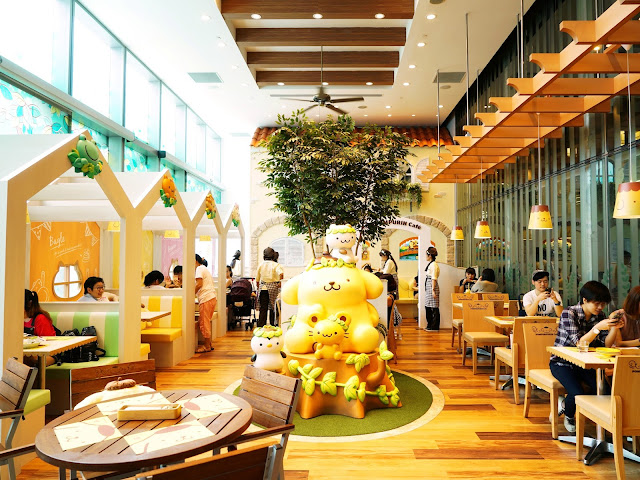 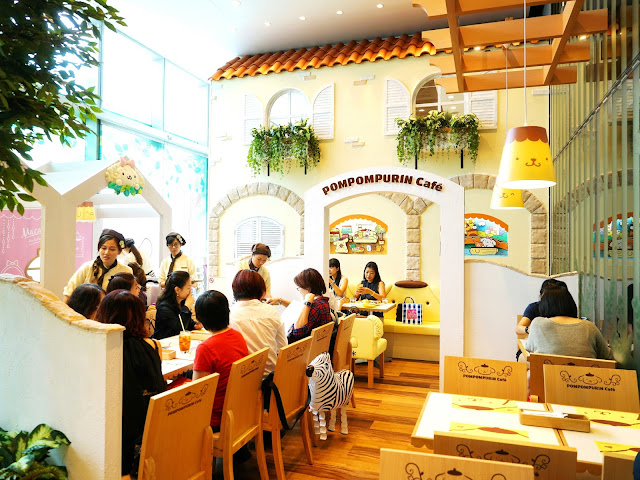 Our local store is nestled on level 4 of Orchard Central (nearest mrt: NS23 Somerset). Its premises can be considered a prime one, being situated visibly behind the glass lifts, spacious with high ceilings and kissed by lots of natural daylight. Perfectly apt for the garden city theme inspired by our little island itself.

As expected, there was a queue when we went on the official opening day, 18 April 2016 (why not two days earlier on 16 April as it's Pompompurin's birthday?). My dining companions went at 11am and waited in line for around 50 minutes before getting a table. I was puzzled initially as the café was only half-filled but later learned that it’s the service staff’s way of “crowd control” as the kitchen was not ready for a sudden influx of orders.

Once in, be prepared to be greeted by….. POMPOMPURIN….. EVERYWHERE! 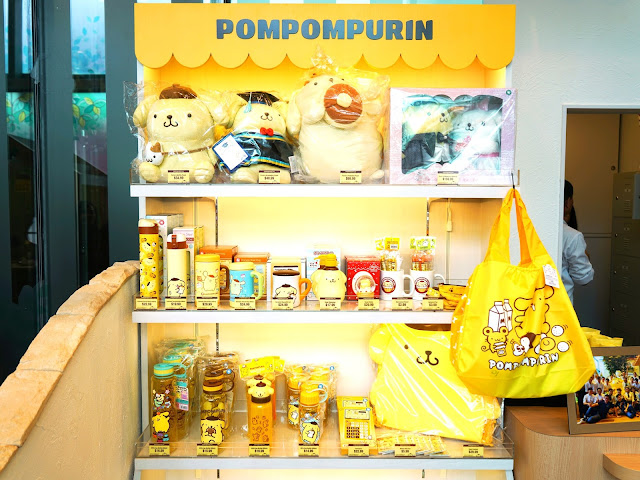 From paper table mat, coasters, lampshades, plushies to a merchandise section, you can’t escape the imprint of Pompomurin at each and every nook of the café. Not that fans wants to anyway… I’m thinking more in the shoes of Instagram boyfriends/husbands who came with their girlfriends/wives.

When in Rome, do as Romans do. When in Pompompurin Café, do what Pompompurin fans do. One of which is taking numerous act cute shots/selfies/wefies with the chubby canine.

After the waitress took down our orders, she declared, "Okay, now you all can go take photos first". LOL!!! 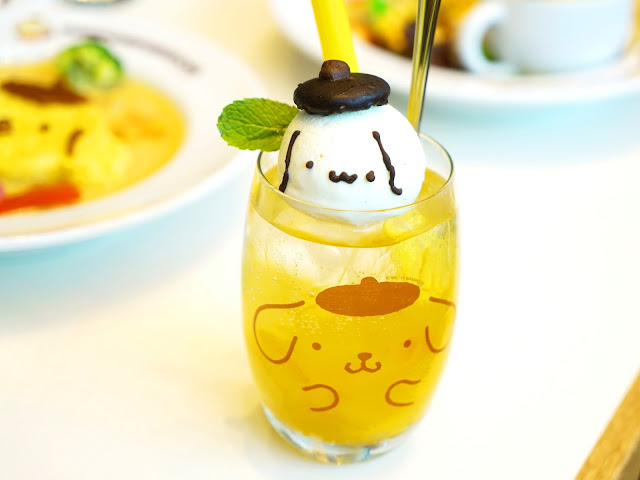 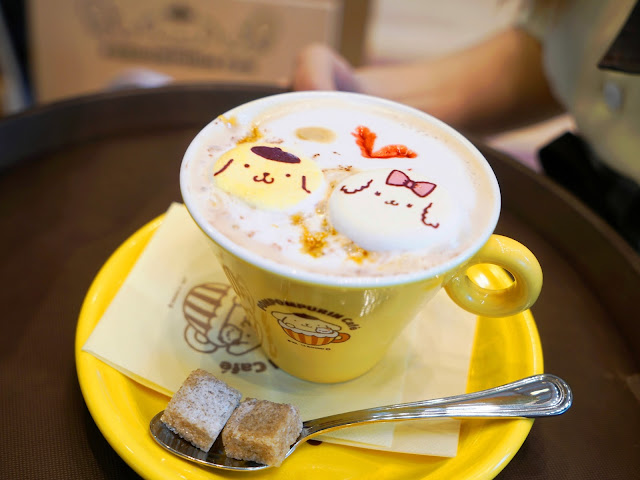 It is no surprise to see the food and drinks taking after the form of Pompompurin.

Expect Love Love Hot Marshmallow Latte ($12.99) to come topped with marshmallows of Pompompurin and its poodle friend, Macaroon. Awwwwwwww look so sweet right!!! So is the taste of our Mango Soda & Ice Cream Float ($11.99). Sweet. 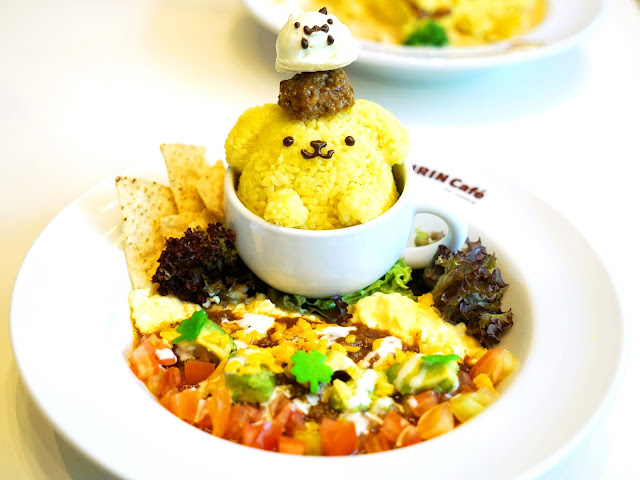 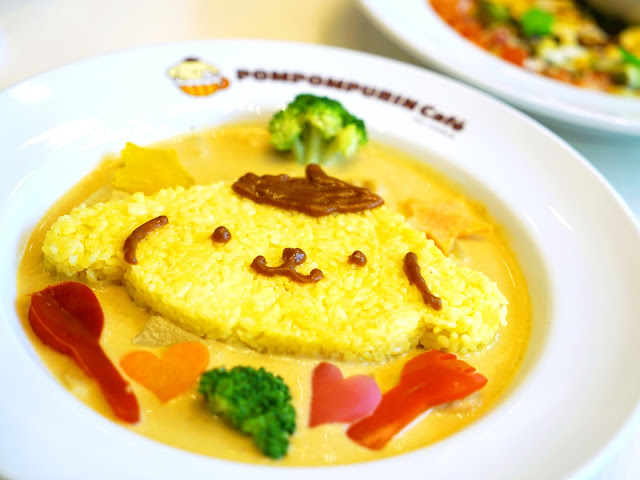 I wonder if it would be traumatic for kids dining here to see the 3-D Pompompurin-shaped rice "falling" from the cup, before being "stabbed" by a spoon and then mixed "beyond recognition" with meat and veggies. Noooooooooo!!! But that's what we should do before enjoying the Taco Rice in a Cup of Friendship ($19.99).

To be frank, I wasn't expecting much gastronomically when I made the visit, so was not as sorely disappointed with the food as some of my friends did.

In fact, the rich and creamy Coconut Milk Chicken Curry ($17.99) was pleasantly acceptable, though it tasted nothing like Japanese or Thai or Indian or any other curry I had before. It was in an unique class of its own, and somehow brought me back to my younger days when I wasn't particular about what I eat. 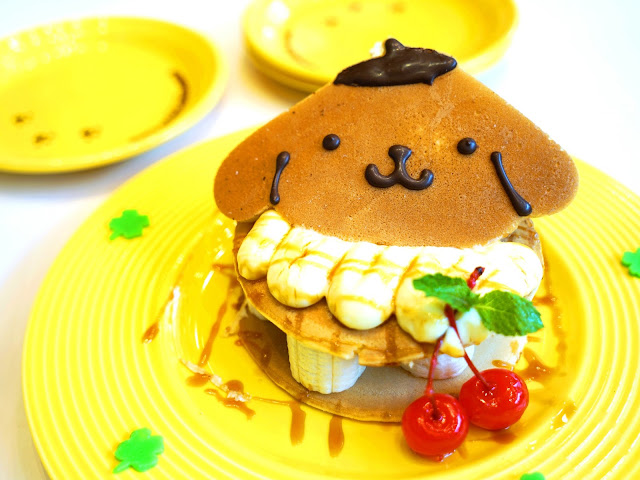 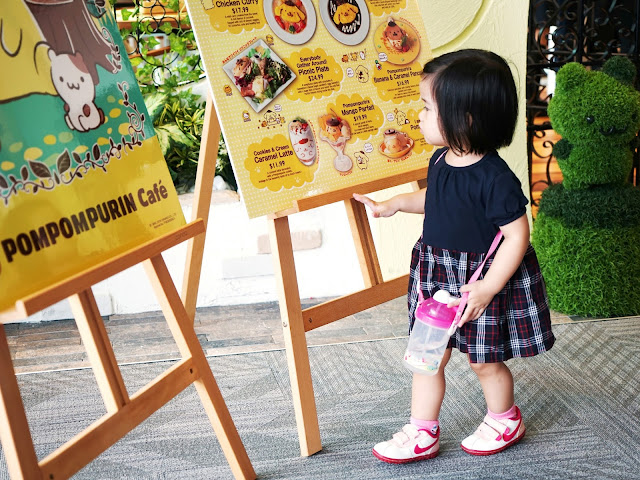 Our Banana & Caramel Pancake ($16.99) features pancakes stacked with banana, cream with a drizzle of caramel sauce. It would fare better if the pancakes were of the thick and fluffy kind. Best thing on the plate would be those bananas. Notably fresh with ideal ripeness and sliced to thick chunks for a satisfying mouthfeel. (Can I insert a crying out loud emoticon here?)

As a sucker for cutesy stuff, I'm happy to have an experience of Pompompurin, the first Sanrio character café in Singapore. Worth a visit. One visit.

Next to look out for would be the Hello Kitty Café in Changi Airport Terminal 3 (slated to open in May). Gudetama, when are you coming??? 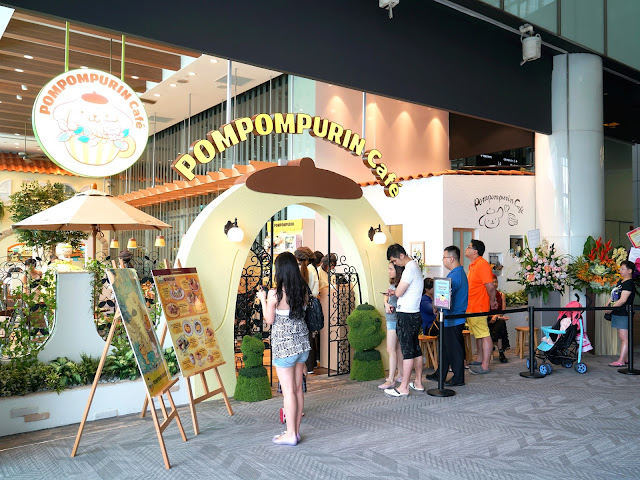 Prices stated are in Singapore dollars and subject to 10% service charge & 7% GST.