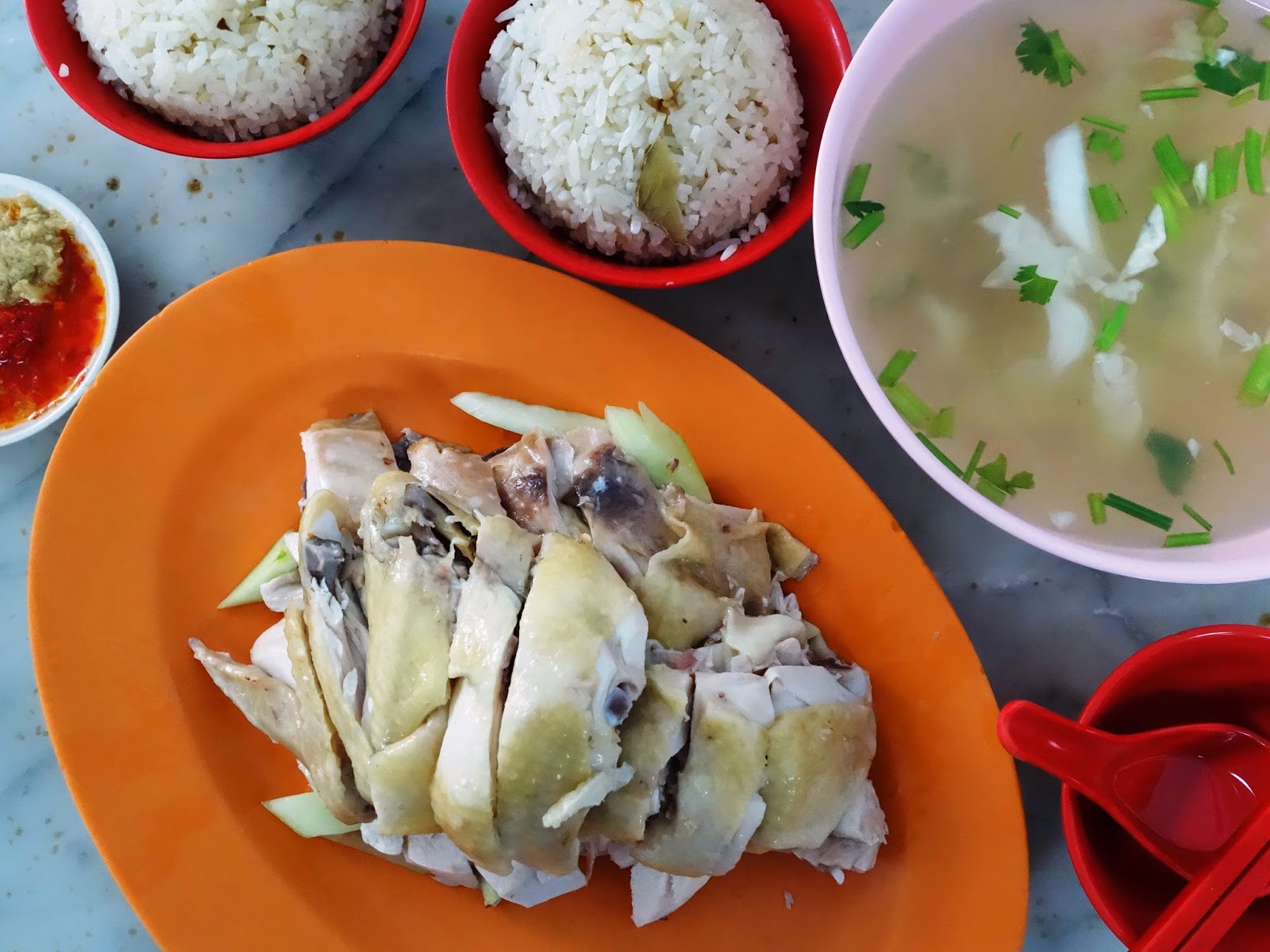 Chicken Rice is a local staple food which can be found in almost every corner of Singapore, from the most inconspicuous coffeeshops (such as Yishun 925) and hawker centres (such as Tian Tian) to eateries (such as Boon Tong Kee, Wee Nam Kee, Loy Kee) specializing in this well-loved national dish. Atas-ified versions can even be found in 5-star hotels, most famous being the award-winning Mandarin Chicken Rice at Chatterbox in Mandarin Orchard.

If you ask me, one of my favourites and personal best has to be Yet Con Hainanese Chicken Rice 逸群鸡饭! They have been serving their style of authentic Hainanese chicken rice at the exact same spot in Purvis Street (near the iconic Raffles Hotel) since 1940! Oh my goodness, we're talking about an age-old institute that has survived world war II and is already in business for 74 years!


Yet Con has been operating at the very same spot since 1940, with its décor kept like the kopitiams of the 1960s. Its reputation for Hainanese Chicken Rice has also survived through the ages, along with the real Hainanese tradition of serving its chicken without any dressing sauce. Keeping to the old recipe also means that their chicken is not soaked in cold water and is cooked to the bone, both allowing the chicken taste to star. The rice here is more tender than fluffy, with a savoury aroma that may be salty to those unused to it. Other must-tries include their Hainanese Pork Chops, which are breaded and deep-fried till crispy on the outside and juicy on the inside, and served with a sauce with potatoes and onions. Be warned, that sauce is highly addictive! - See more at: http://www.citynomads.com/reviews/singaporean/959/5-rising-chicken-rice-masters-you-have-to-try-in-singapore#sthash.59lBJr1N.dpuf
This world-famous staple in Singapore is available almost everywhere, including hawkers, school canteens and restaurants, and variations of it can also be found in different parts of the world - though any local would tell you the best is right here on our sunny island. This dish has crucial elements of fragrant oily rice topped with tender chicken, accompanied by a trio of sauces: chilli sauce containing sriracha, lime juice, chicken broth, ginger and garlic; dark soy sauce; and a garlicky ginger sauce.
Although simple-looking in appearance, chicken rice is unique in its depth of flavours that come from utilising different techniques and chicken parts in cooking. The rice grains, for example, are first fried in chicken fat before being cooked in chicken broth and sometimes ginger. The chicken, which has to be at the perfect size to produce enough oil for flavour but is not tough, is often soaked in ice-cold water right after cooking to ensure the meat stays tender – which is why it is often served at room temperature or even cold.
- See more at: http://www.citynomads.com/reviews/singaporean/959/5-rising-chicken-rice-masters-you-have-to-try-in-singapore#sthash.59lBJr1N.dp 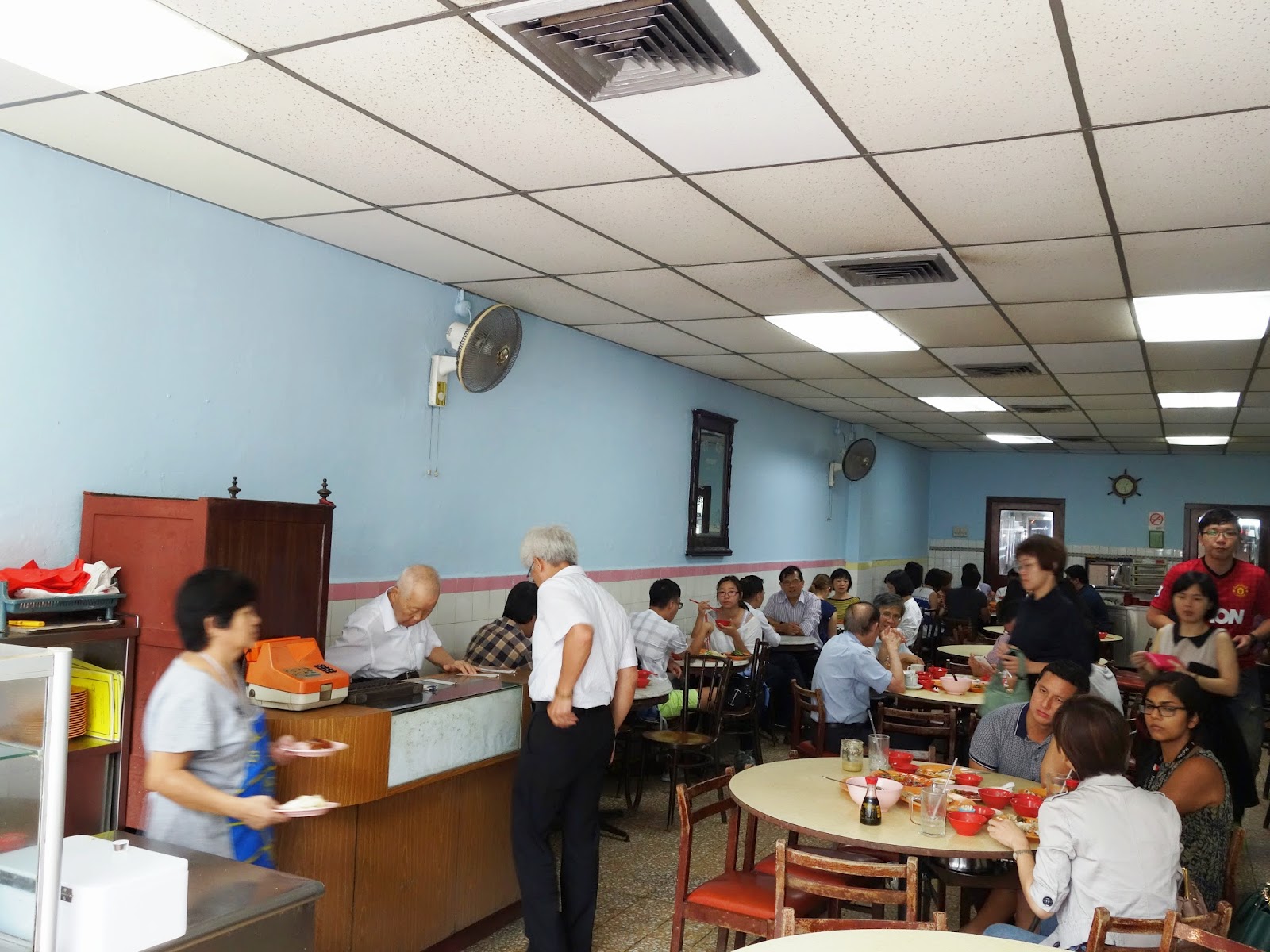 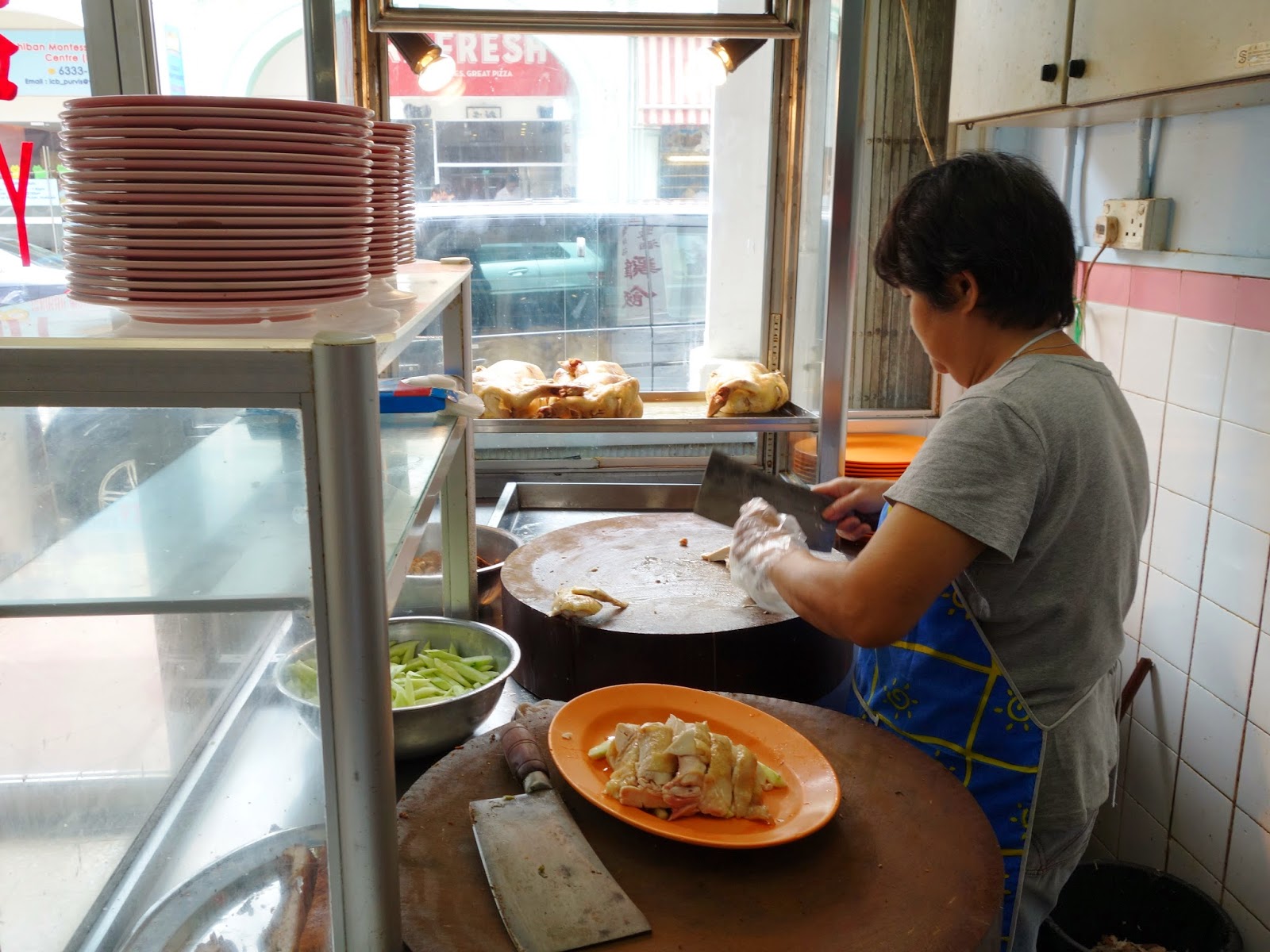 One noticeable betrayal of what modernization has done to this bastion of authentic Hainanese Chicken Rice is the cool blast of air-conditioning when one steps into the restaurant, otherwise Yet Con retains that old-school vibe (completed with matured servers communicating in the Hainanese dialect) which gave us a glimpse of how dining out in olden Singapore feels like.

The set-up is simple and functional: Closely-spaced marbled table tops and wooden chairs maximizing the capacity of the fluorescent lighted dining area, a cash counter which facilitates the collection of payment (check out the vintage-looking abacus and orange coin phone!) and an 'execution ground' located right next to the restaurant entrance which bear witness to the countless number of cooked chickens that are being chopped up each day. 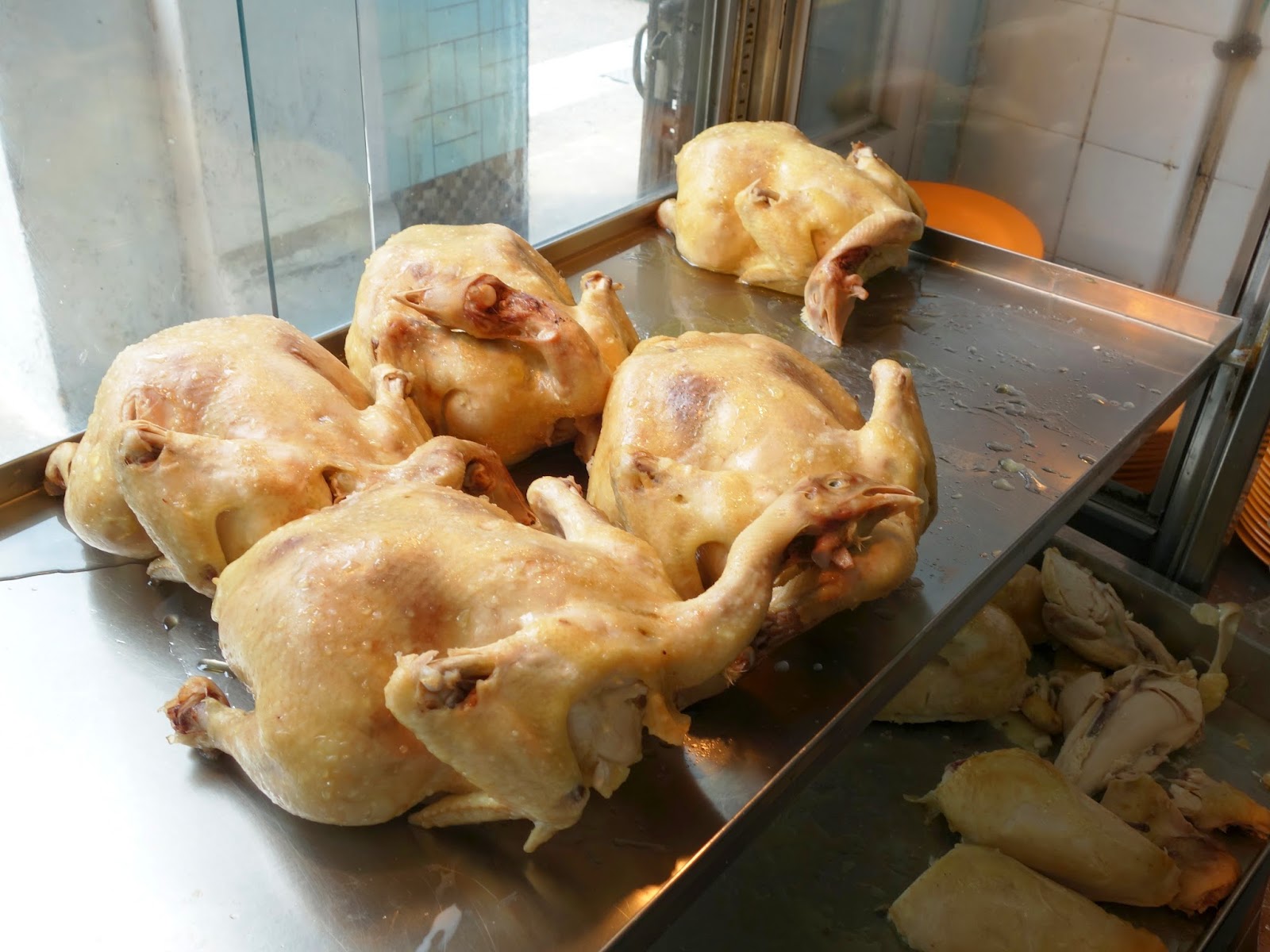 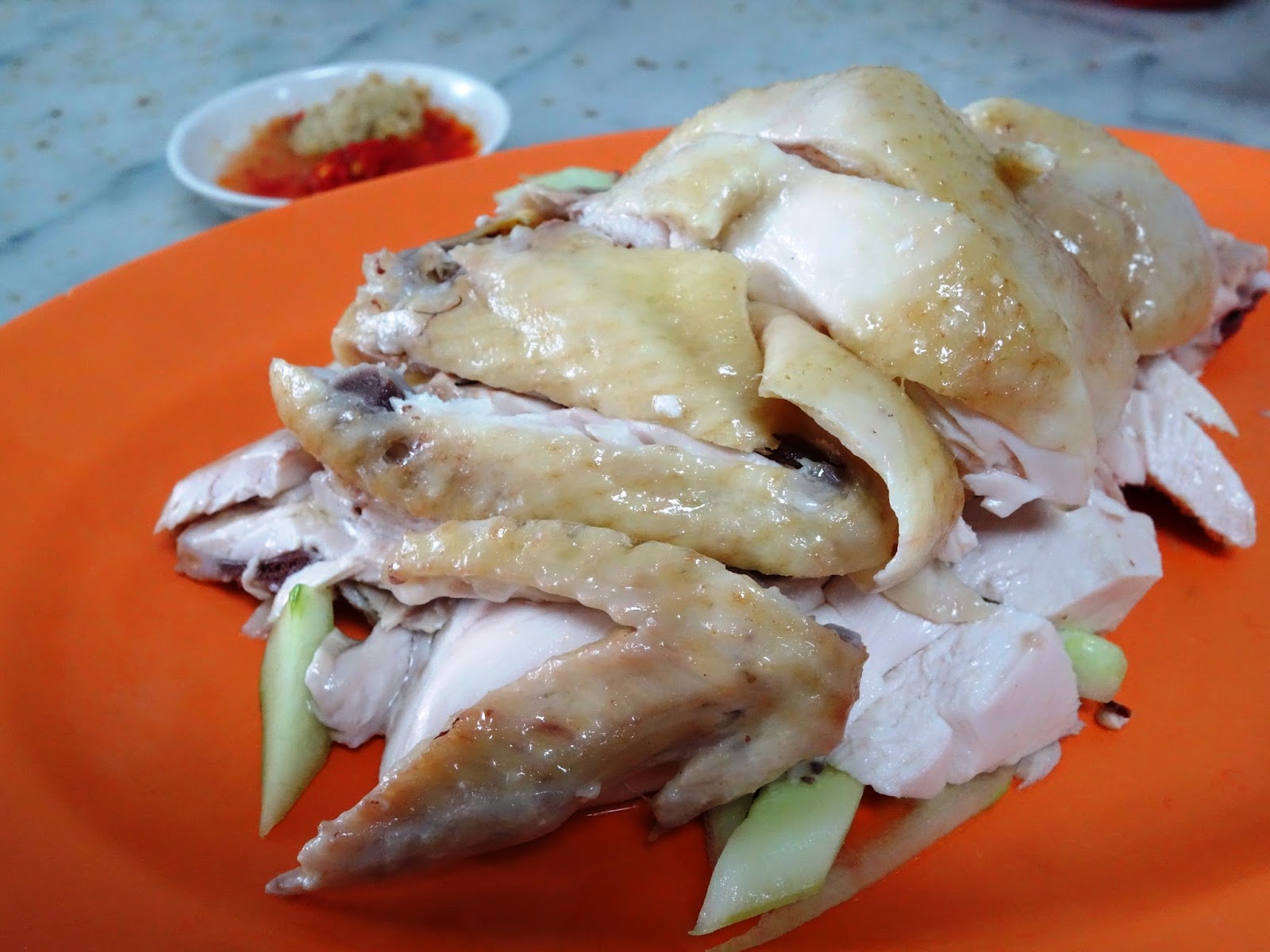 Unlike most places which hang up their chickens, the tender-boiled poultry at Yet Con are being laid on enamel trays to prevent the juices from dripping so that flavors are better retained. Also holding true to Hainanese traditional way of preparing the dish, the chickens are not immersed in cold water to instantly reduce the temperature and put an end the cooking process.

Which is why you wouldn't find that silky gelatinous 'jelly-like' layer under the chicken skin, but what we have instead is a very pronounced 'chickeny' flavour that's missing from a lot of commercial chicken rice stalls which gave their chicken the water treatment. Just lighted salted without any overwhelming drench of soy sauce seasoning, the natural taste of chicken came through intensely in every meaty bite. I love the chicken taste at Yet Con! 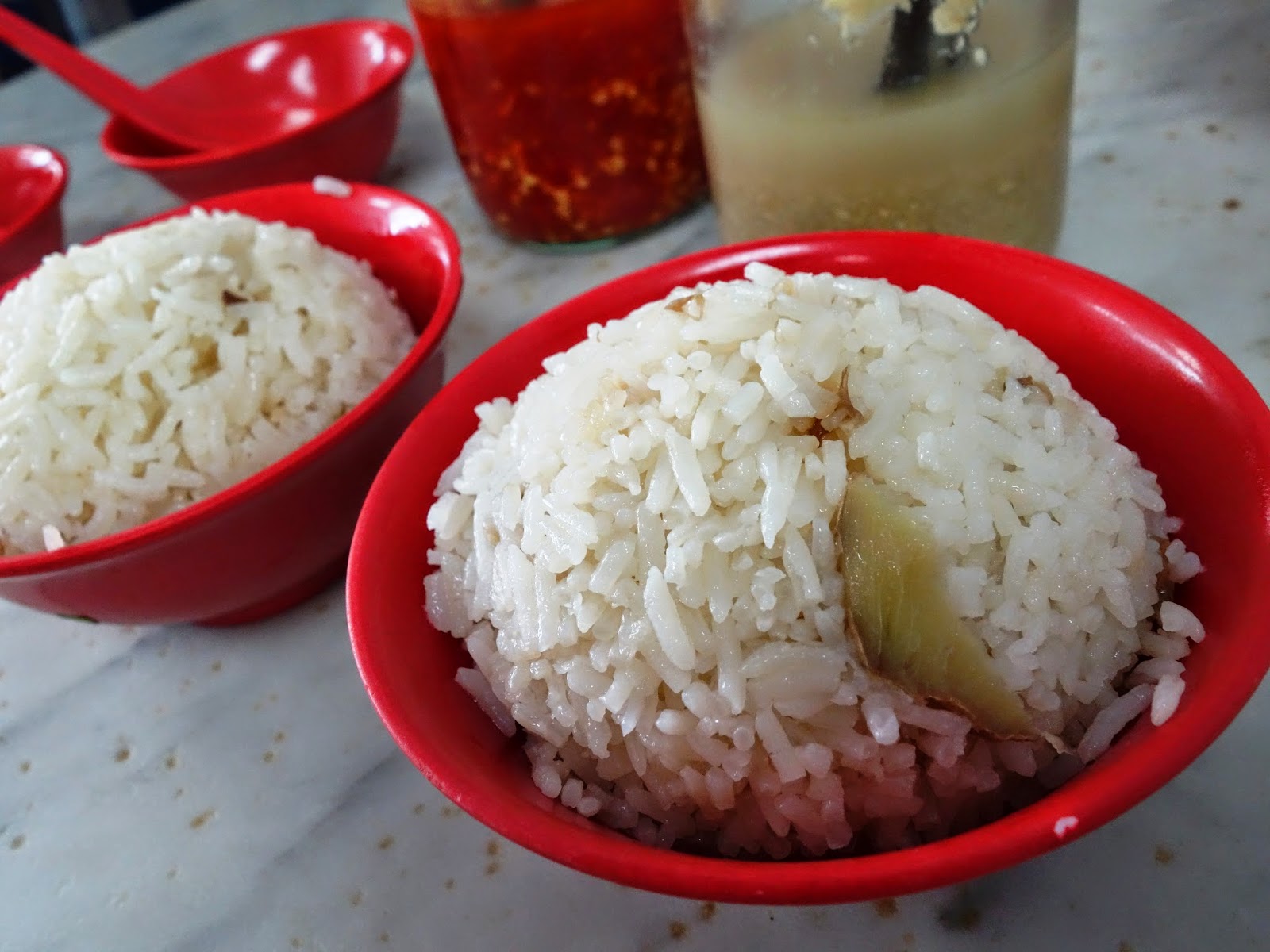 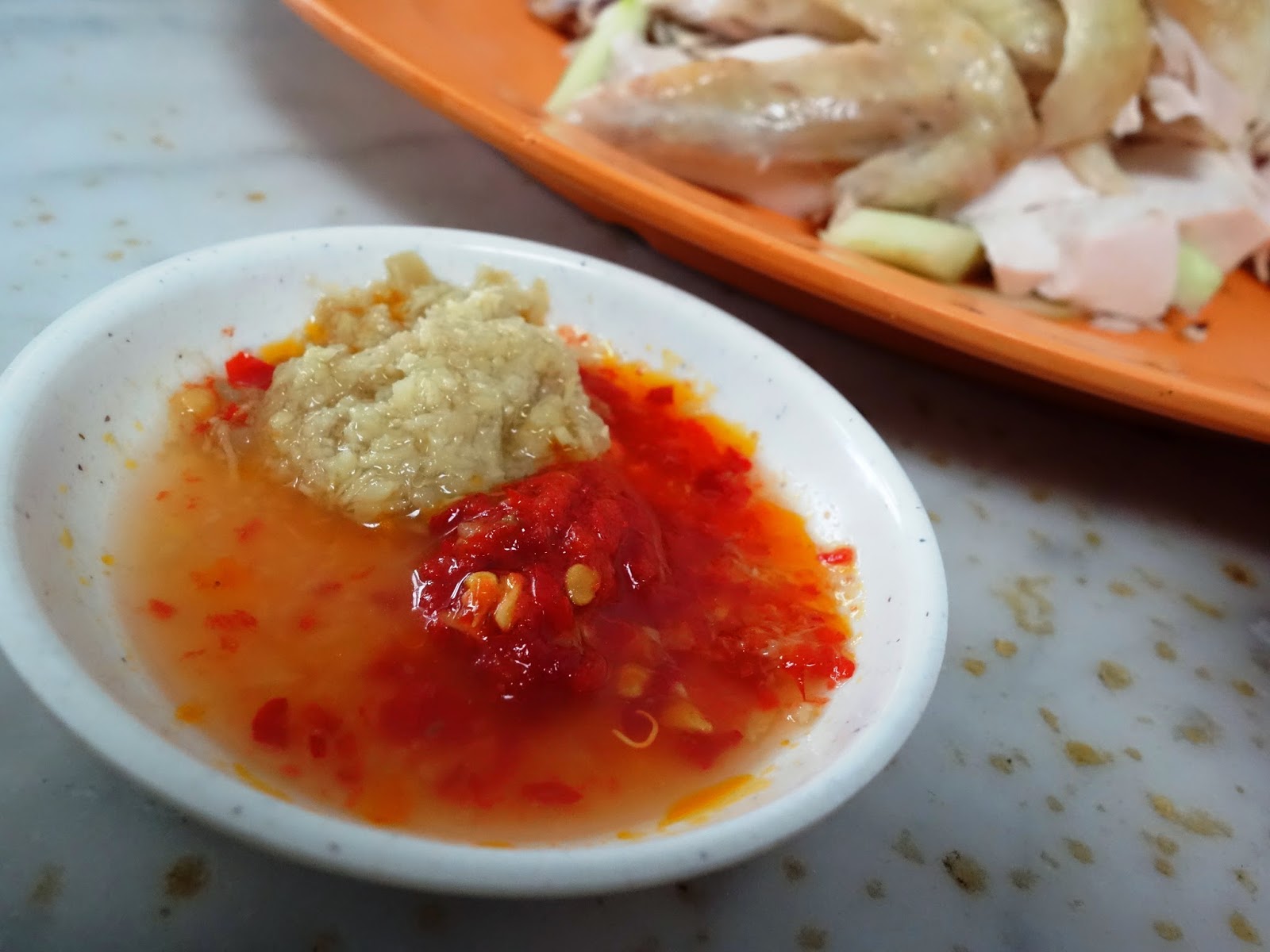 I also like it that the chicken is cooked to the bone, without any slightest hint of pinkish blood, yet remained adequately tender. Some might find the boned chicken pieces a tad difficult to consume, but there is also this theory that less moisture is lost if chopped this way.

Though the yellowish hue chicken at Yet Con might not look the most appetizing or photogenic, nor its texture most succulent compared to other versions, there is a rustic charm to it which appeals greatly to my tastebud, especially when paired with their amazing rice!

The rice is always seductively aromatic with the lovely scent of ginger, shallots and chicken stock flavour, and each savory grain is cooked to a great texture without being greasy. So so so good, I can eat it on its own! The accompanying chilli and ginger dip are a tad too watery for my liking, but still holds sufficient power to enhance the overall Hainanese Chicken Rice meal experience. 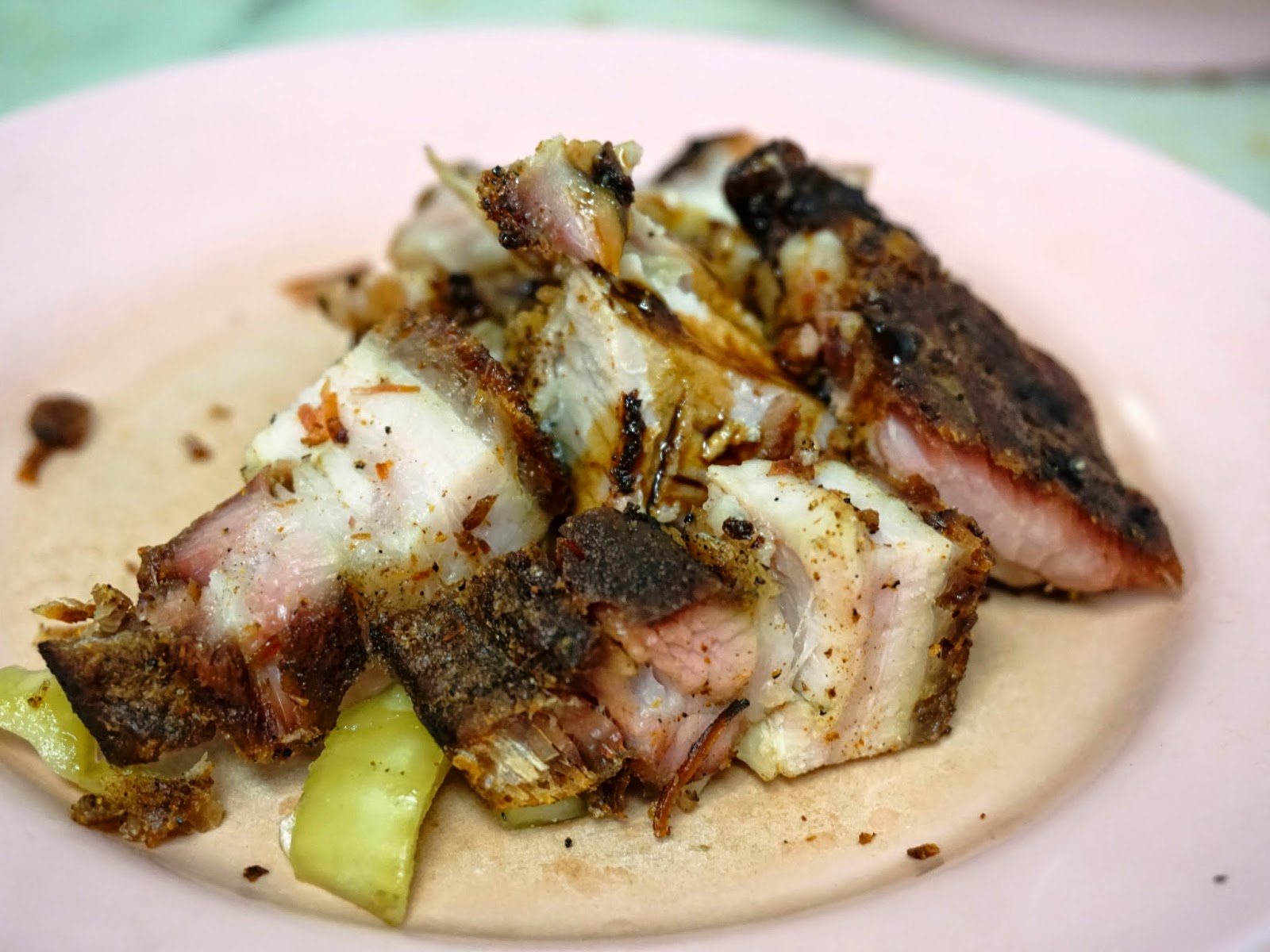 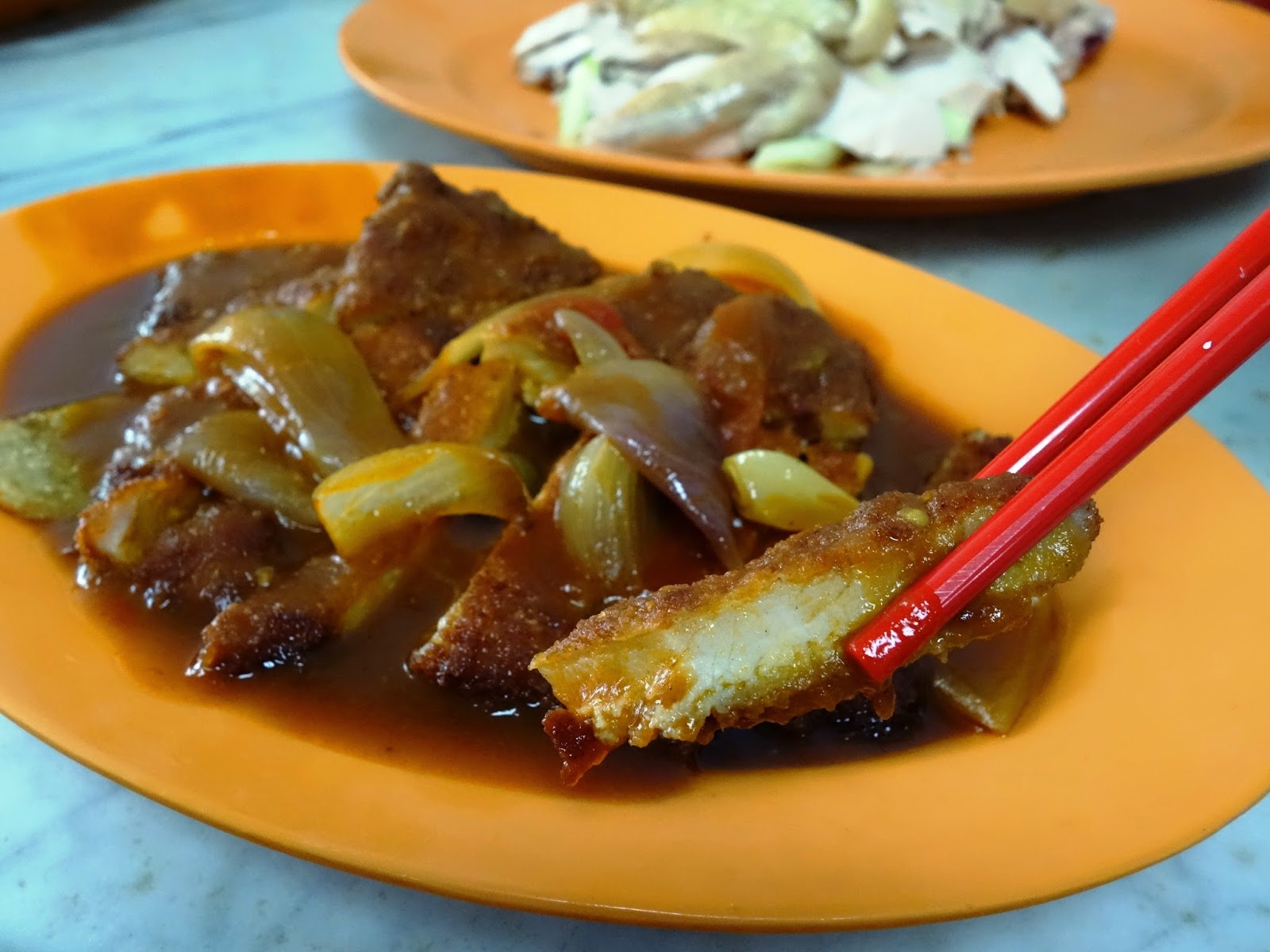 Many a times I've seen other tables order tucking into another of Yet Con's highly recommended dish, which is described on the menu as 'Roast Pork with its crunchy, crispy skin served with pickled cabbage raddish and sweet black sauce'. But sadly when we finally decided to order it too, the meat our mouth chewed on was dry and hard. We couldn't go beyond a piece each.

It might be wiser to stick to just the chicken rice, or if you must have variety, their deep-fried Hainanese Pork Chop with potatoes, onions and green peas coated in a luscious sweet & sour sauce and Mixed Chop Suey of stir-fry assorted vegetables and meat are safer, tried-and-tested-to-be-good choices.

You will find that the menu does not state the prices of food items, and perhaps will have a question or two on how your meal's final amount is deprived at. I tried to make out the scribbles on the billing chit, I tried to ask the old uncle presiding at the cash counter once, my conclusion is: It's easier to just pay and go.

Service can be non-existence, but it's not that bad enough to deter me from returning to have one of the best Hainanese chicken rice in Singapore. :) 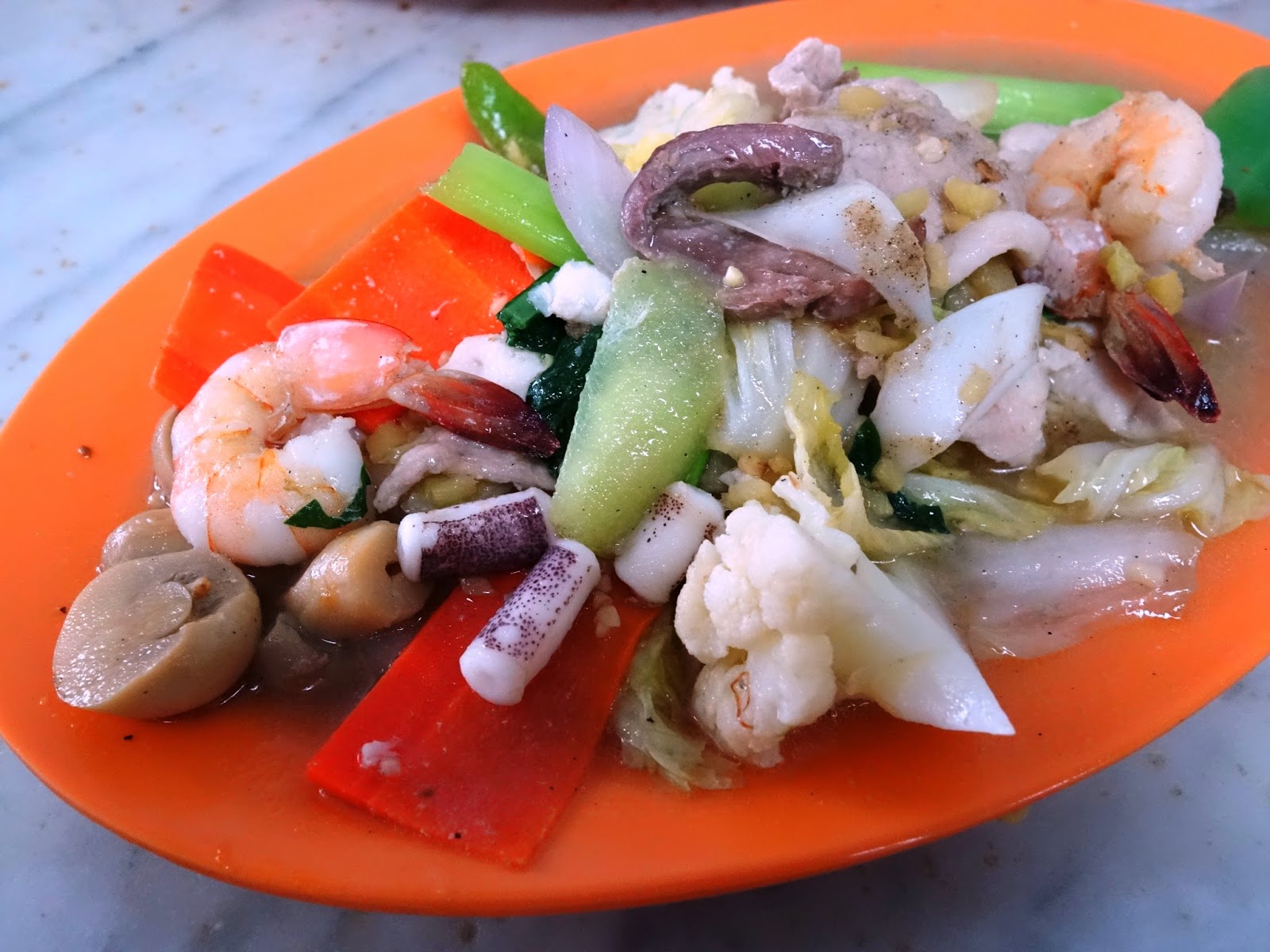 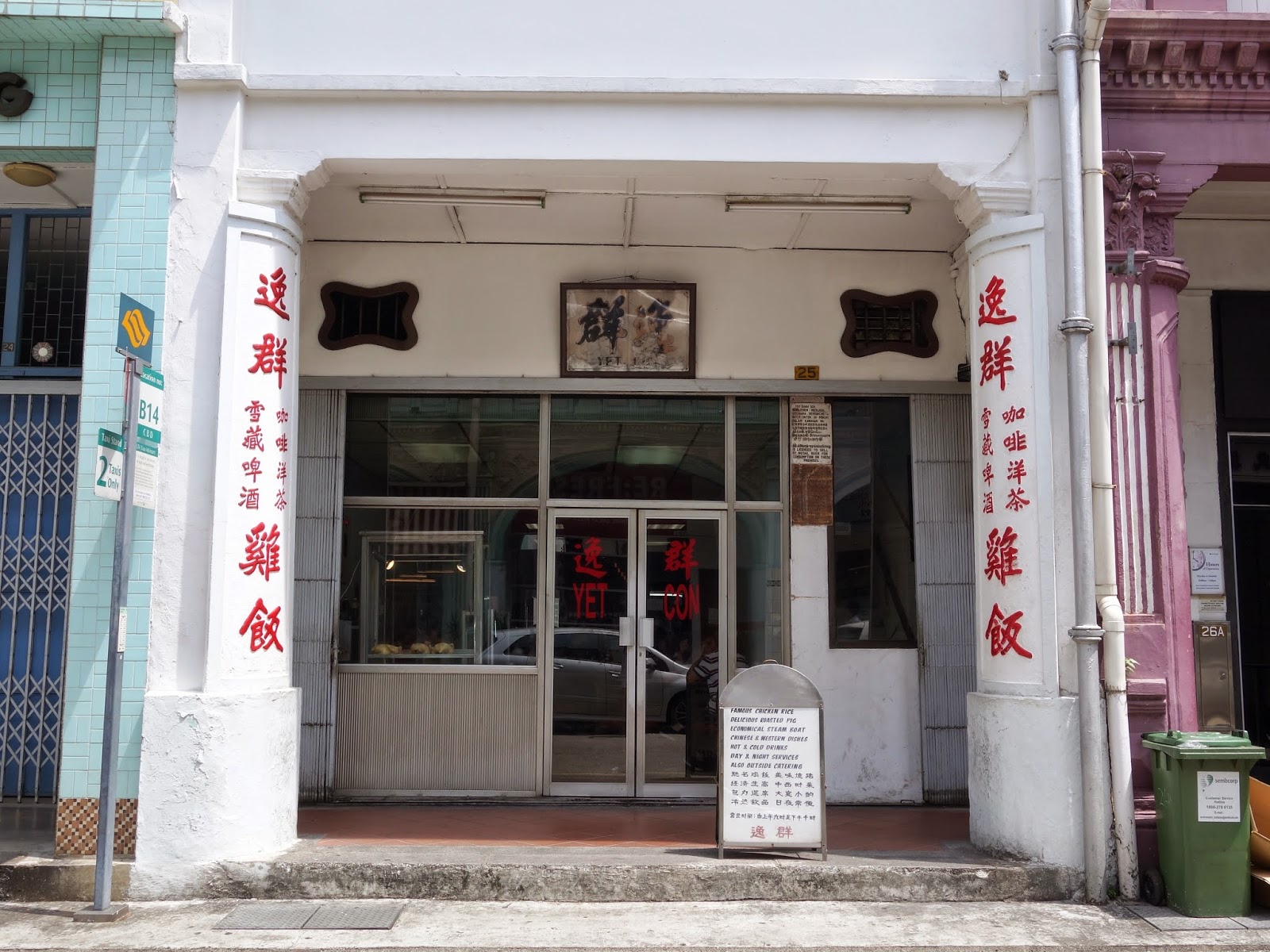