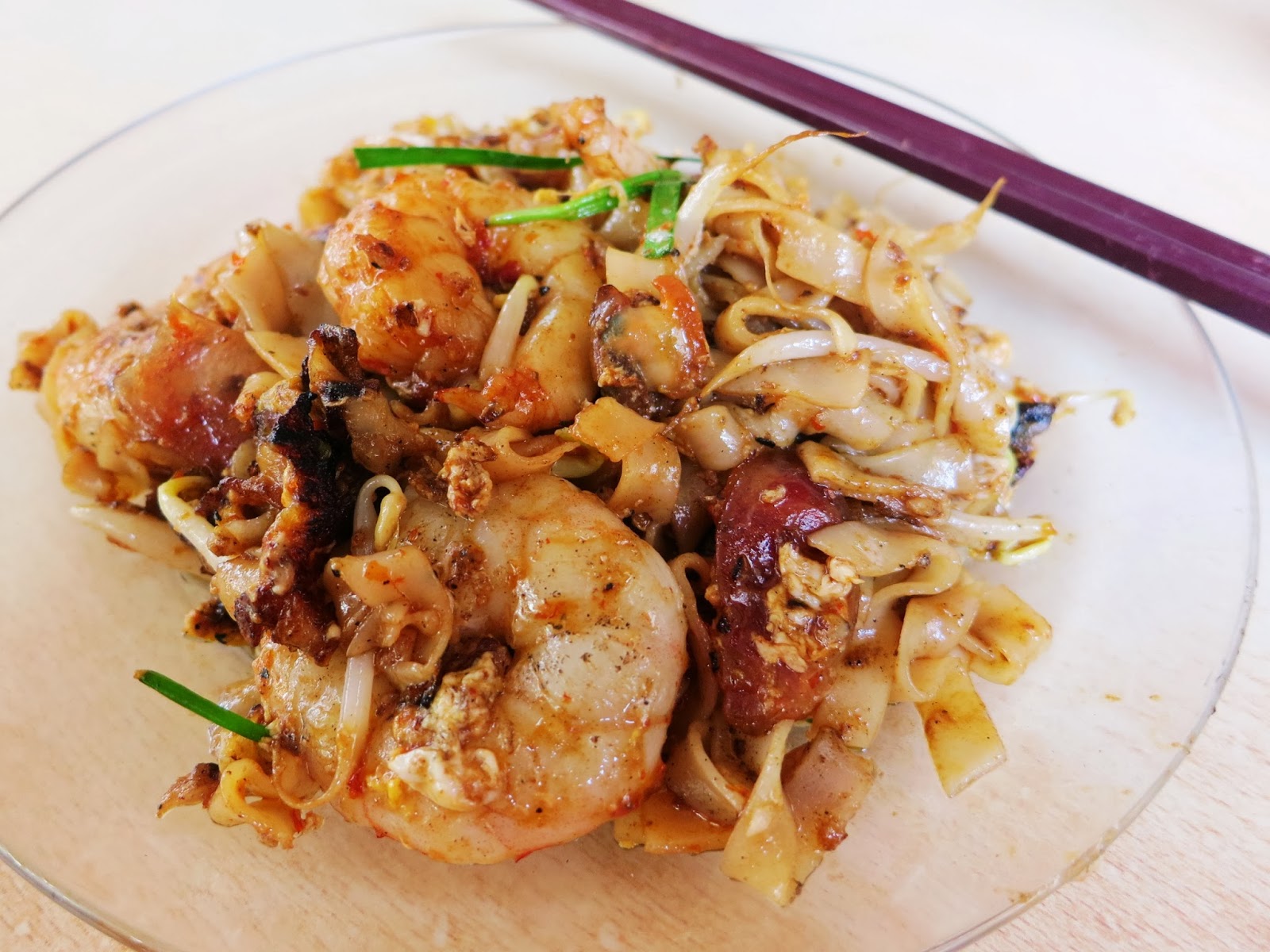 We already had our tummies filled with Penang Road Famous Teochew Chendul, Assam Laksa and Rojak, but a trip to Penang wouldn't be complete without Penang Char Koay Teow! So off we went to Kafe Heng Huat at Lorong Selamat, Georgetown, where one of the best and most delicious char koay teow in Penang can be found.

The hawker auntie manning the stall is as famous as the char koay teow itself. Always wearing a red beret, sometimes with goggles over her eyes, her alleged arrogance and temperamental responses towards customers' complaints about high prices and long waiting time has earned her quite a notorious reputation among the locals. A Facebook campaign was even set up to encourage people to boycott her stall. Wah, so controversial! But we care about none of that! We just wanna eat the char koay teow! Lol! 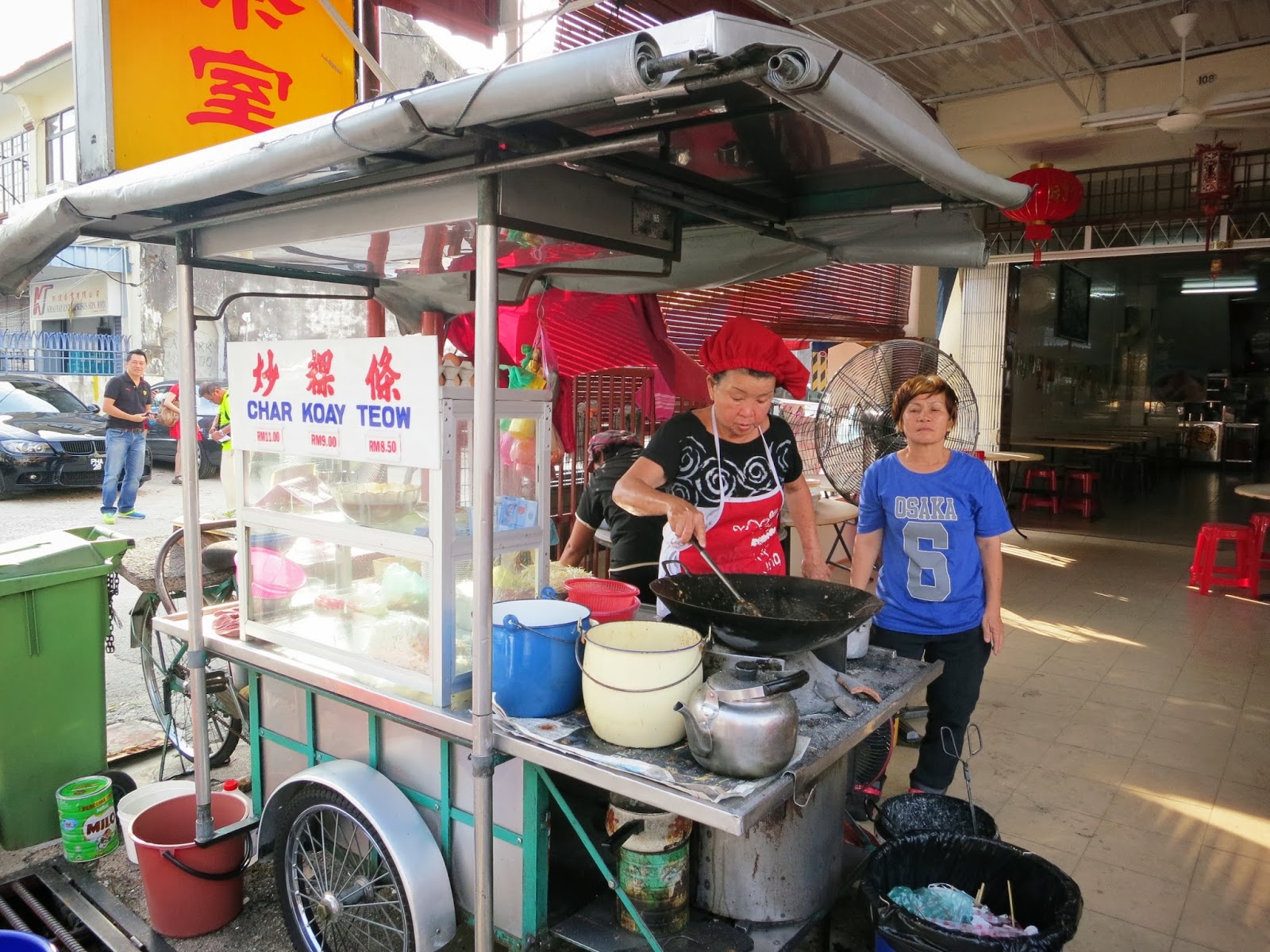 The sound of "cling clang cling clang" greeted us as we approached the stall, and the furious battle within the wok went on almost non-stop the whole duration we were there. Auntie is of course the commando-in-charge with her right hand stir-frying up all the actions, while maintaining her left hand stretched behind, body moving along rhythmically.

She's totally unfazed as we moved near to take photographs. There was even an angmoh enthusiastic who placed his power-looking DSLR directly high up over the wok to take an aerial shot of the char koay teow! Wah!!! (No, he didn't get a scolding) 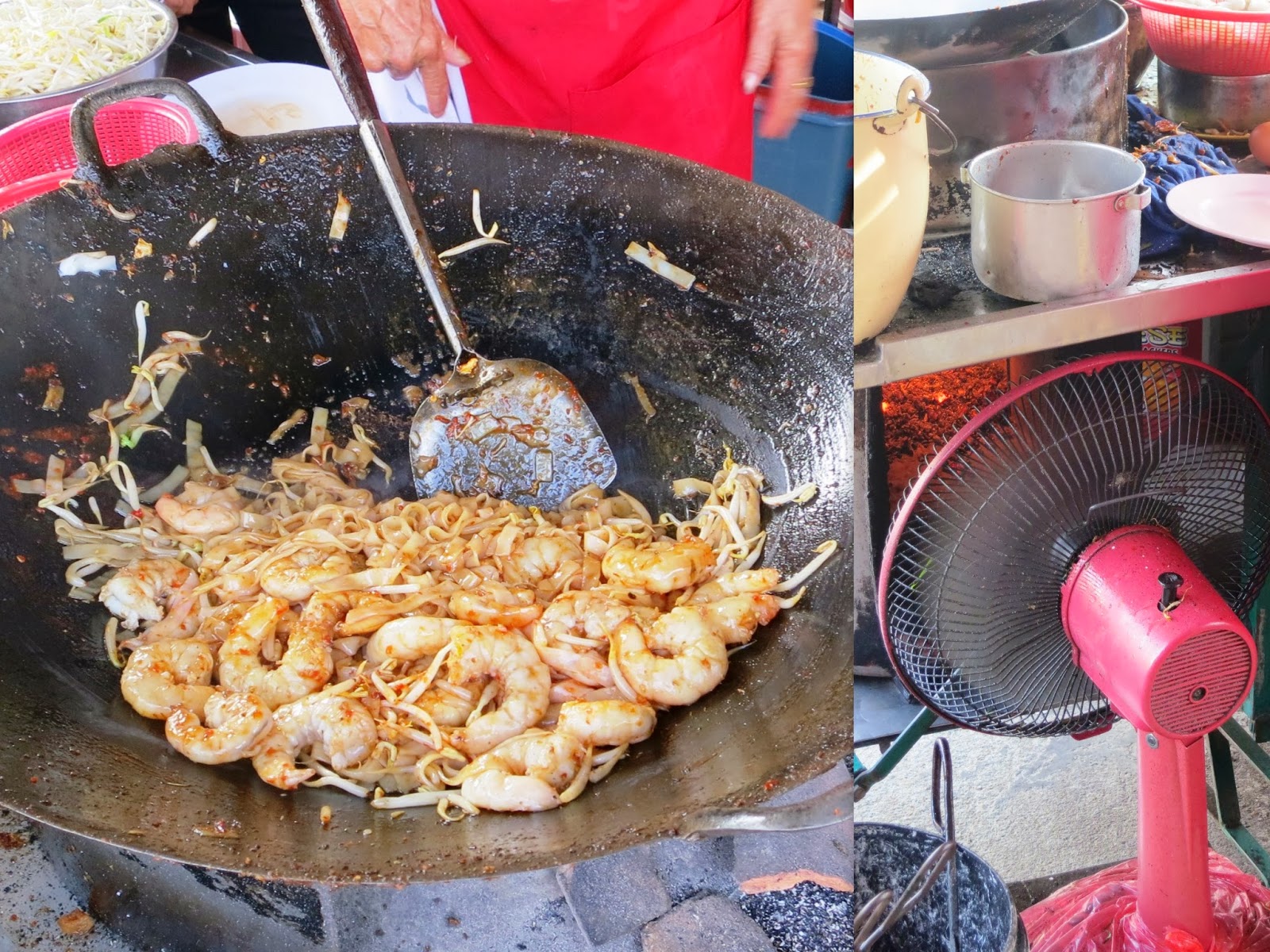 30 minutes wait for my char kway teow wasn't that long a wait (I was told it's longer during peak hours) and I spent most of my time watching the auntie from my table. As some restaurants nowadays wow diners with an open kitchen concept where they can watch the chefs do the cooking, I can't help but think that hawker stalls like these are the original 'open kitchen'. These skilful hawker heroes are just as delightful to watch.

A fan is strategically positioned to keep the traditional charcoal stove's fire constantly burning hot. Yes, charcoal fire! This is what gives the plates of char koay teow a distinct smokey complex flavor which is difficult to replicate when using gas stoves. This is what elevates an ordinary plate of char koay teow into divine, calories-worthy status. 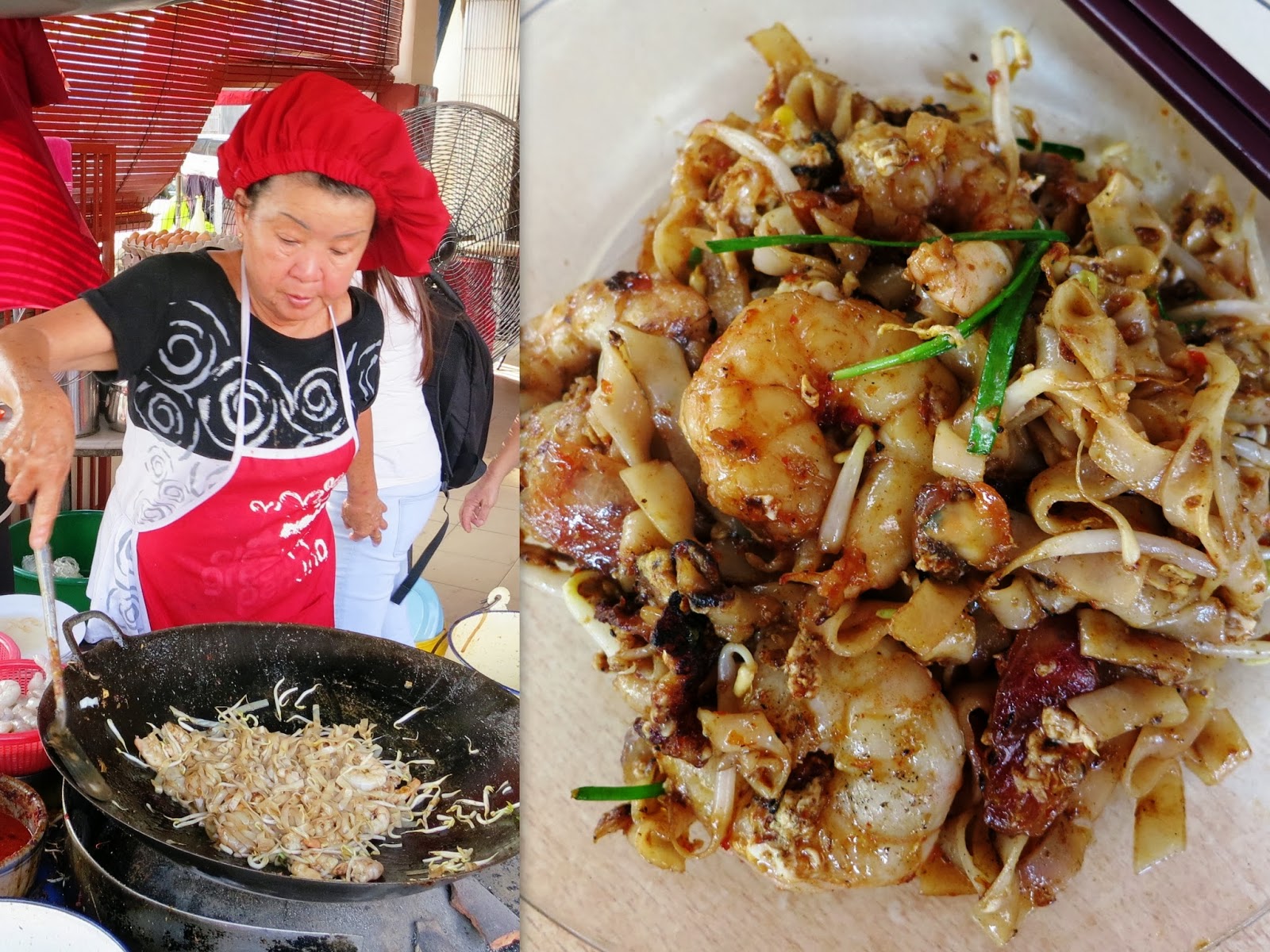 But of course, the other components are just as important, and my humble view would be that the auntie nailed most of it down. 'Most of it' - as I personally find my plate of char koay teow a tad spicy, if not it would have suited my palate perfectly. The flat rice noodles was smooth, flavorsome, and infused with wonderful charred aroma of charcoal fire.

Prawns were big, fresh and full of sweet juiciness. Even I, who has an aversion to beansprouts, enjoyed its lively crunchiness. Together with cockles, Chinese sausages, chives, egg and PORK LARD (woohoo), the whole dish came together so gorgeously. Coated with a seductive glisten, but surprisingly not greasy at all. Excellent!

I would gladly pay the price of RM8.50 / RM9 / RM11 (small/medium/large serving) anytime for a plate of this awesome goodness. It's considered to be expensive by local standards but paying a little more for quality food and ingredients shouldn't be an issue. Should I repeat again that the prawns were big, fresh and full of sweet juiciness? Not quite the usual standard of prawns usually used so don't expect to pay standard price lah. 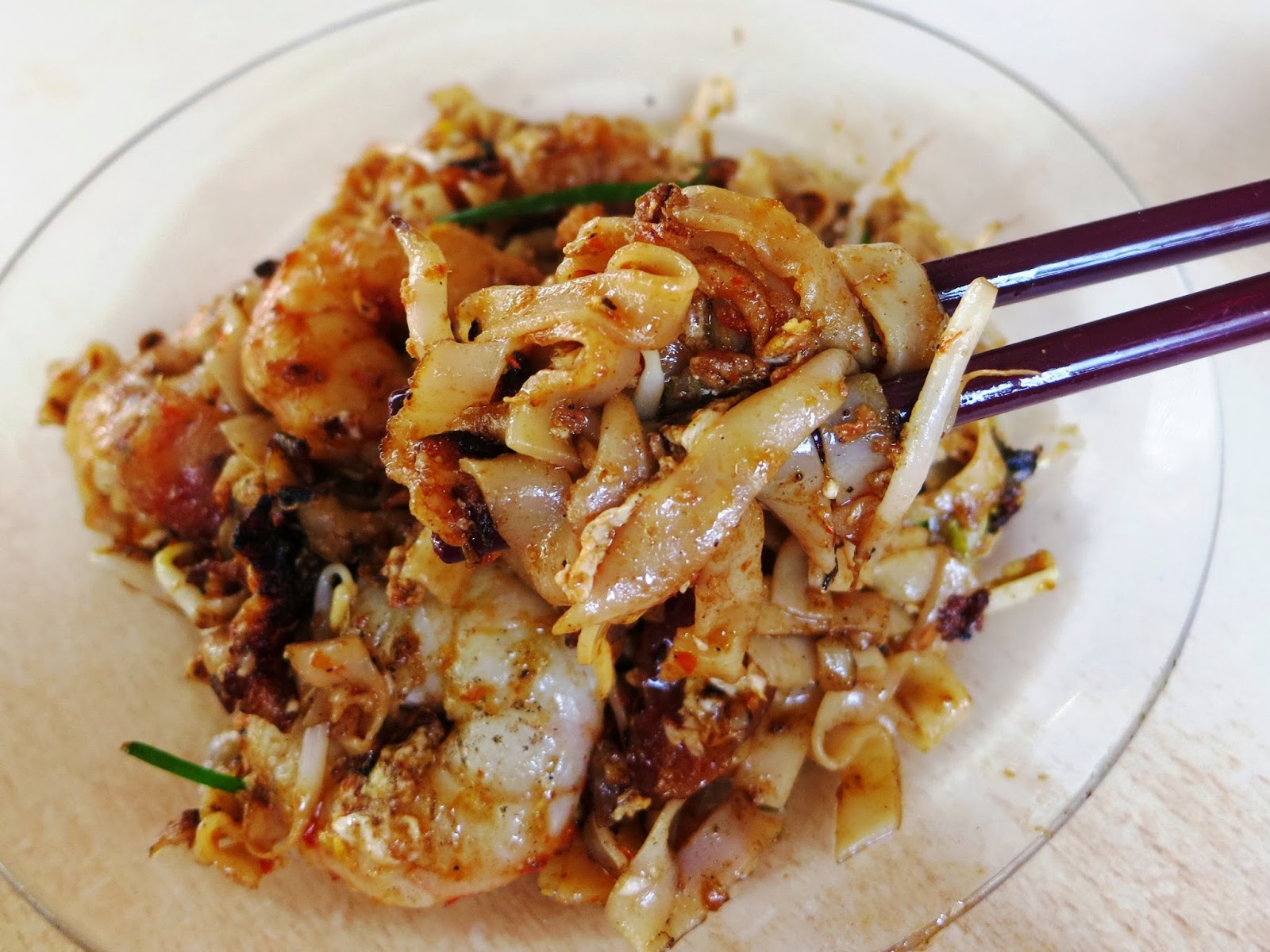 It was around 5pm-plus when we arrived, and by the time we finished our char kway teow, the auntie was already done for the day and starting to close stall. Perfect chance for photo opportunity with her! She was very obliging with none of the unfriendliness that I heard about, and smiled proudly when I praised that her char koay teow is very nice. It must be one of her good days.

Blessed much to leave with a satisfied tummy and beautiful memories. TYL ♥

Penang, I will be back to eat more char kway teow!!! 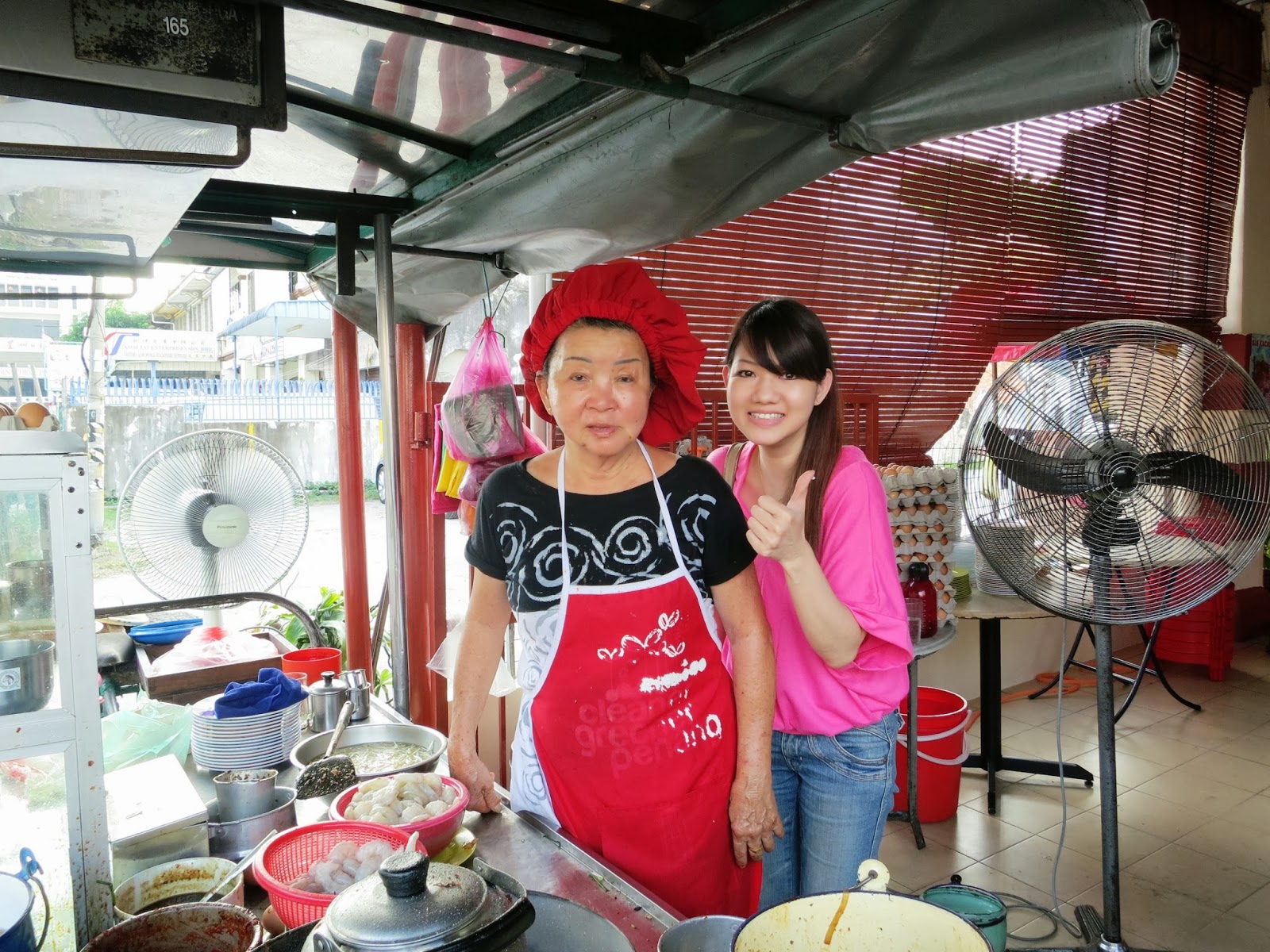