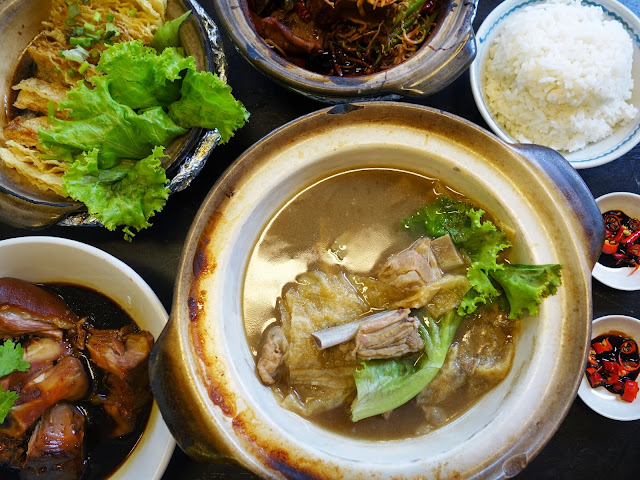 I must slap myself for being a walking contradiction. After all the whining about wanting to lose weight, the lure of a food trail filled with promises of delicious best hawker delights was way too tempting to resist. Ahem... and so I went. After 6 hours of non-stop eating at 5 different places later, I found myself at the final stop ~ Soon Huat Bak Kut Teh 順發肉骨茶 at Simpang Bedok, which is a 10 minutes walk away from Tanah Merah mrt station (exit B). Full as I am, I told myself I will somehow make tummy space for this bak kut teh (pork ribs soup) founded by Jabez Tan, a man whose heart was transformed by God, leading to his repentance and a new lease of life not only for himself, but also for his team which is made up of mainly ex-convicts. 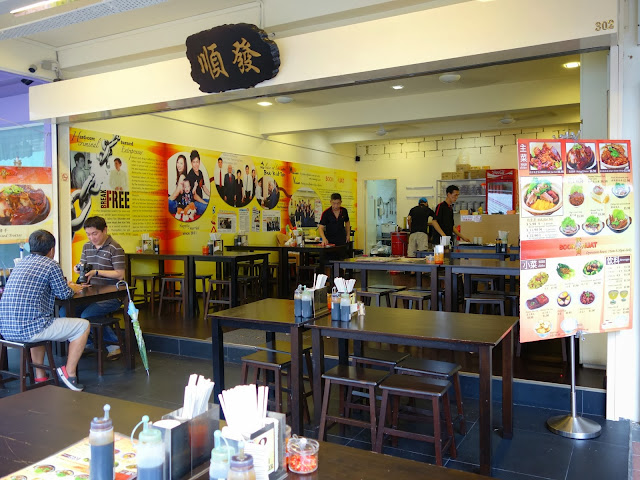 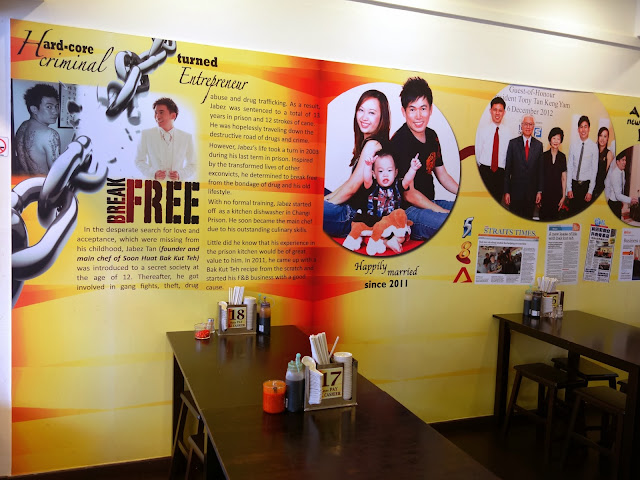 Though Soon Huat Bak Kut Teh has only started its operations at Simpang Bedok in April 2013, their unique style of bak kut teh has been established since two years ago back in its former location at Jalan Kayu. Reviews on their bak kut teh wasn't positive then, so Jabez has been continuously working hard in tweaking his recipe.

I understand that Soon Huat Bak Kut Teh does not bear any affiliation to the New Soon Huat Bak Kut Teh at Jalan Kayu and Kovan which has a similar name, because of the dissolve in partnership. If you want to have a taste of the bak kut teh formulated and improved by Jabez, Simpang Bedok would be the place to go to. 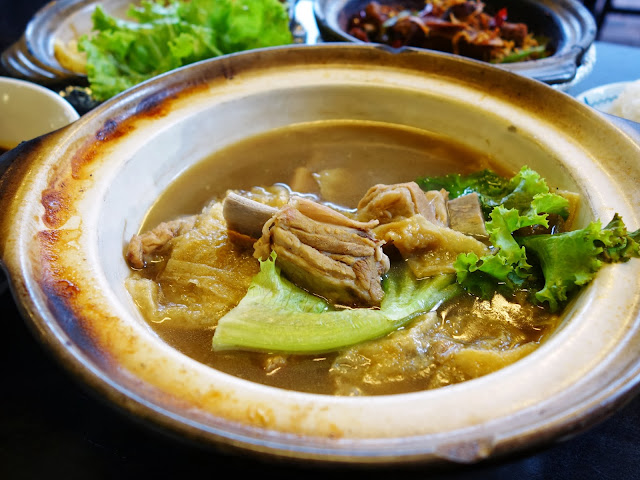 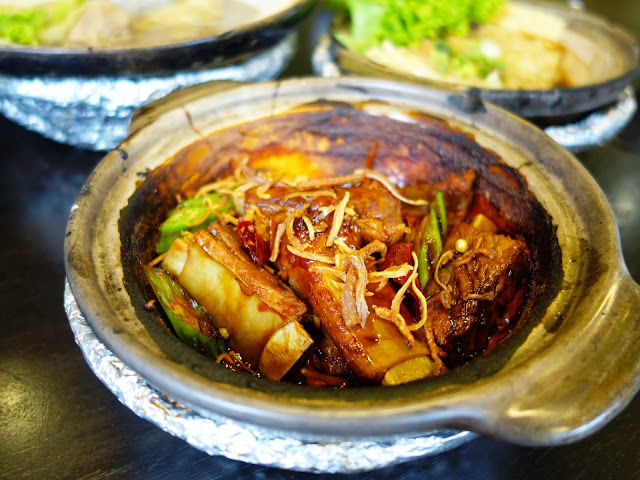 Okay, what do you exactly mean by "unique style of bak kut teh?" you might ask.

For those of us who are familiar with the Teochew-style bak kut teh broth simmered with copious amount of garlic and pepper or the Malaysian Klang-style dark brew redolent of aromatic herbal notes, this bak kut teh by Soon Huat combines the elements from both style. It can be deemed dangerously running the risk of being labelled "not here not there" by bak kut teh purists.

However, I'm open to seeing bak kut teh breaking out of its well-defined frame and taking on a more innovative approach, resulting in a new unique style which will find acceptance in the more adventurous palates.

The broth is robust, with well-balanced flavours of herbal, peppery and sweetness integrating in harmony. Available in different serving sizes ($5.90 S-1pax / $11.90 M-2pax / $22.90 L-4/5pax), each claypot of standard Bak Kut Teh comes brimming with pork ribs, beancurd sheets, pig liver, pig stomach and additional choice of golden mushrooms. If pig offal is not your thing, do just request for the classic pork ribs alone.

Deviating from the usual soupy convention is the Dried Bak Kut Teh ($6.90). Served sizzling hot in a claypot, the first thing that arrested our senses was the distinctive smell of dried cuttlefish which gave the whole dish a gentle blanket of aroma and texture.

The star is still the pork ribs of course. Jabez uses Argentinian pork which has less of the pork odor and yields a more tender bite. The meat is well coated in a gooey gravy prepared by reducing bak kut teh soup, dark soya sauce, and enhanced with hints of subtle spiciness from the dried chilli, fried shallots and ladyfingers. Utterly tasty and best enjoyed with a bowl of fragrant white rice ($0.50)! 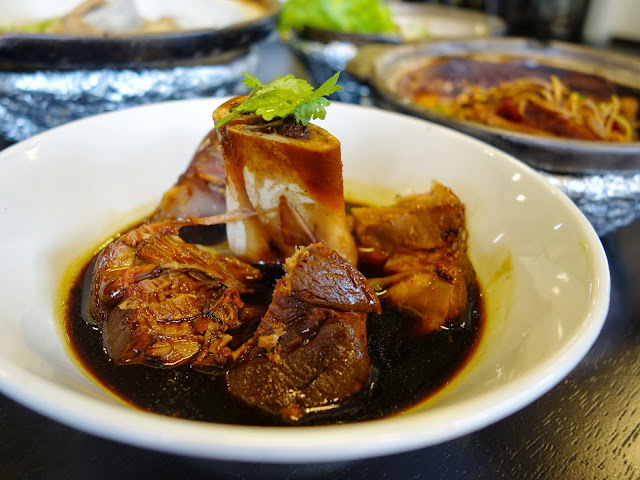 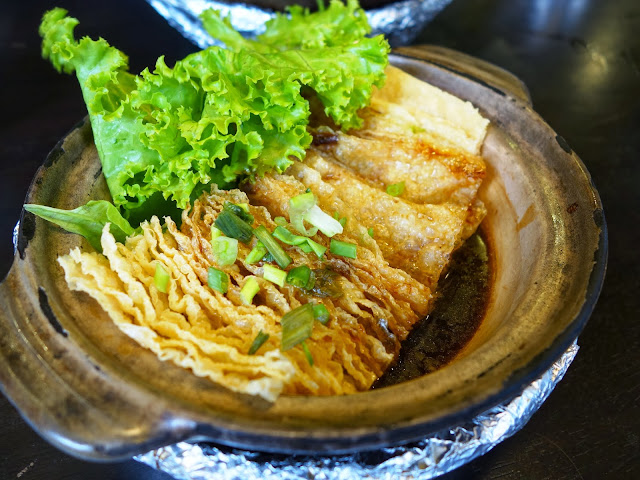 After trying the dry bak kut teh which set the bar on a high, the Braised Trotter ($6.90) somehow paled in comparison. Though it was simple yet prettily presented, I was a tad disappointed that the meat is lacking a beautiful tenderness to match.

Surprise of the meal went to the Braised Tow Ki ($3.90)! A customer had requested to eat tow ki mixed with soy sauce, though the initial taste wasn't up to par, it quickly became a success after some experimenting by Jabez. The pieces of beancurd sheet were wafer crisp and highly addictive when it absorbed the dark ambrosial gravy! Definitely worth an order! 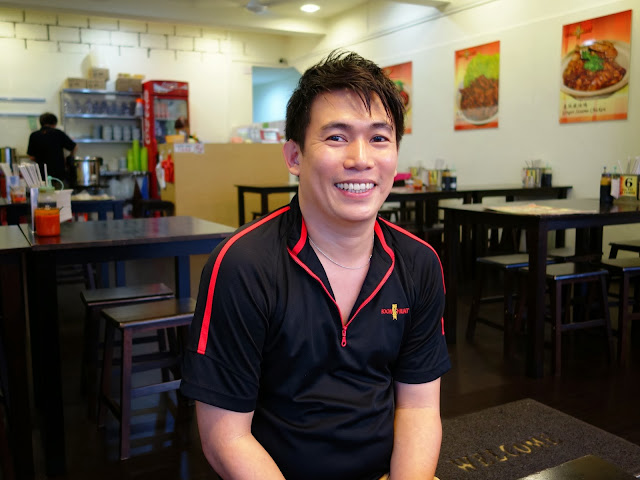 We met Jabez as he rushed back from his external engagement and joined us halfway through our meal. I find him to be a very soft-spoken man as we started chatting, it's hard to imagine him as an ex-convict who was introduced to a secret society at the young age of 12 and began involving in gang fights, theft, drug abuse and drug trafficking. Jabez was eventually sentenced to a total of 13 years in prison and 12 strokes of cane.

It was during his imprisonment when he was ministered with the word of God. "For I know the plans I have for you," declares the Lord, "plans to prosper you and not to harm you, plans to give you hope and a future." ~ Jeremiah 29:11.

This is the verse which gave Jabez the glimpse of hope, an affirmation that he is not as useless as he thinks he is, a verse which provided him strength to pick up the bible and began his walk with Jesus. He could only read the bible in Chinese back then, but he told himself that one day he would be able to understand it in English, and now he did. Slowly but surely, he has overcome the limitations his lack of academic education has bounded him to.

Most importantly, he eventually broke free from the bondage of drug and his old lifestyle. 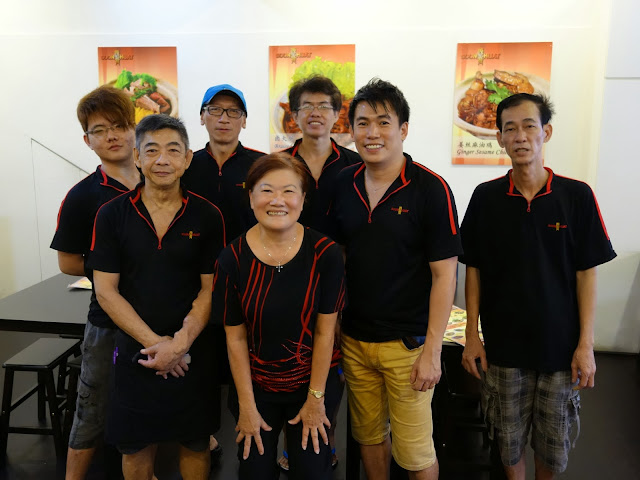 Jabez put the culinary skills which he picked up during his experience in the prison's kitchen to good use. In 2011, he came up with his bak kut teh recipe from scratch, started this F&B business with a good cause and is now certified as a Social Enterprise Association Member - "Soon Huat Bak Kut Teh's social mission is to provide ex-offenders and ex-drug abusers meaningful employment opportunities and provide them with training in culinary and management skills to increase their efficiency in their various roles such as cook, servers, supervisors and cashiers."

I felt like I'm having a meal with a big happy family when dining here at Soon Huat Bak Kut Teh. The servers were warm, friendly and quick with service - I had barely taken no more than a few sips of my bak kut teh soup when one of the guys came over offering to top it to the brim.

The ex-offenders may have a past, but they're no different from you and me, so please let's just put the social stigma aside. Every Thursday after lunch, Jabez will close shop for two hours when his pastor from Hope Church Singapore comes over to give him and his team bible classes. Jabez himself will also make regular Sunday trips to Singapore Changi Prison to minister to the inmates too. 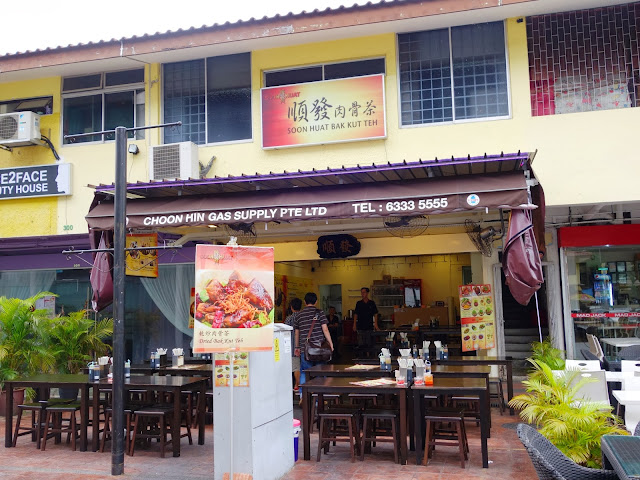 Jabez's mother helps out at the eatery as well and she herself is a walking miracle. A blood clot complication seen her heart stopped for a whole hour, yet she was revived and regained her consciousness within 2 hours after an intensive 8 hours surgery with none of the negative after-effects medical science would have expected. The surgeons' reactions might be those of astonishment, but Jabez knew better. It could only be his prayers in tongues. And God heard his prayers.

As we celebrate the season of Christmas when the greatest love of all came down from heavens, it couldn't be more heartwarming and inspiring to see a man who is blessed by this love becoming a blessing to those around him.

I can only say... Praise the Lord!


If you're unable to view the embedded version, please follow this link:
http://youtu.be/k563zeqKoPs

Posted by PinkyPiggu at 2:05 AM