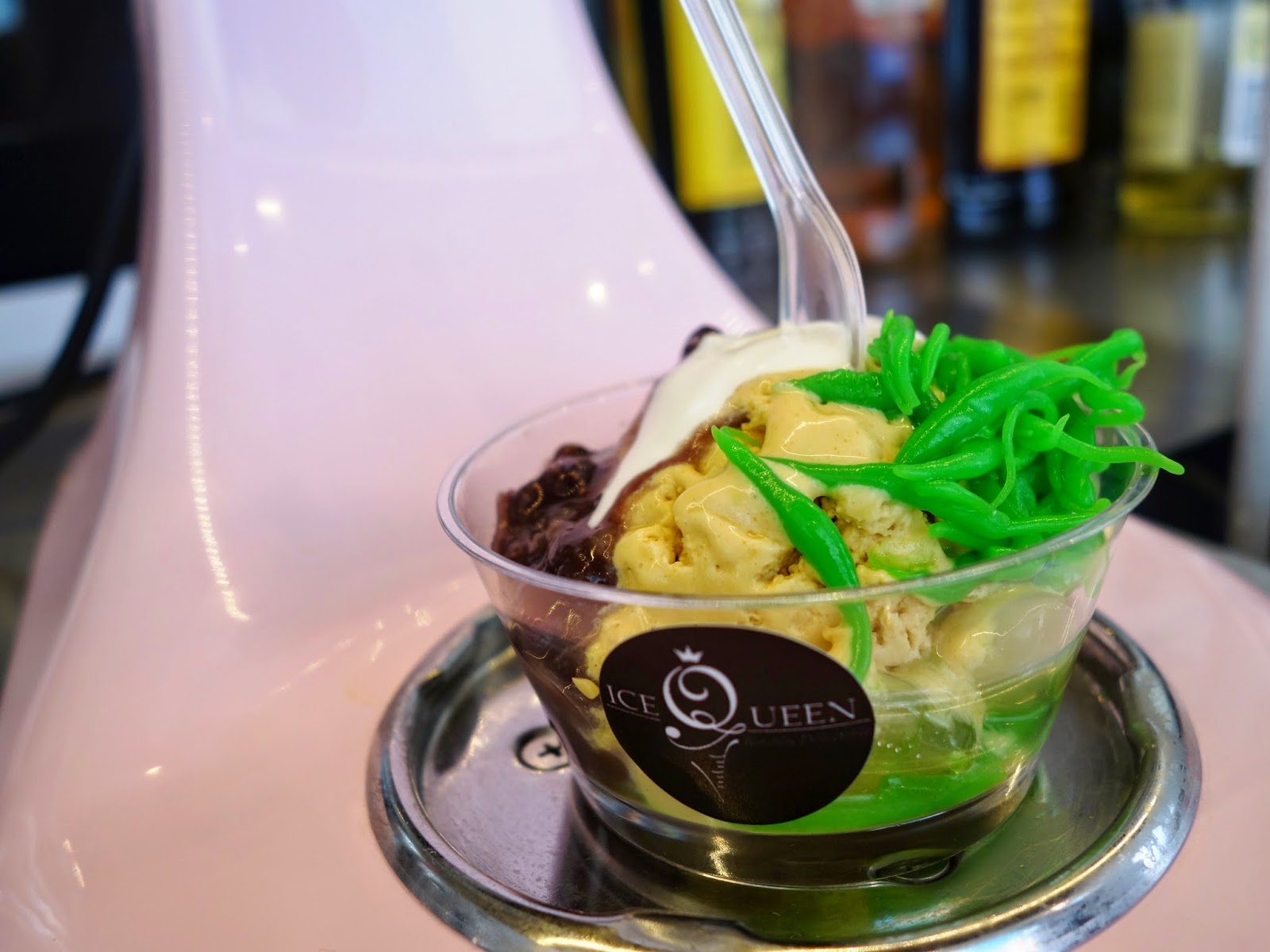 What I have been constantly craving for lately: Ice cream at Ice Queen! The recent newcomer to our local ice cream scene joins the likes of 320Below, Just Like It and Cloud & Cream, specializing in churning out instant frozen delights using liquid nitrogen! I had always thought the concept sounded a tad gimmicky, but a visit to Ice Queen's shop at East Coast Road (opposite Chin Mee Chin, next to Spizza) soon proved me wrong. I want more and more of their cooler than cool deliciousness! 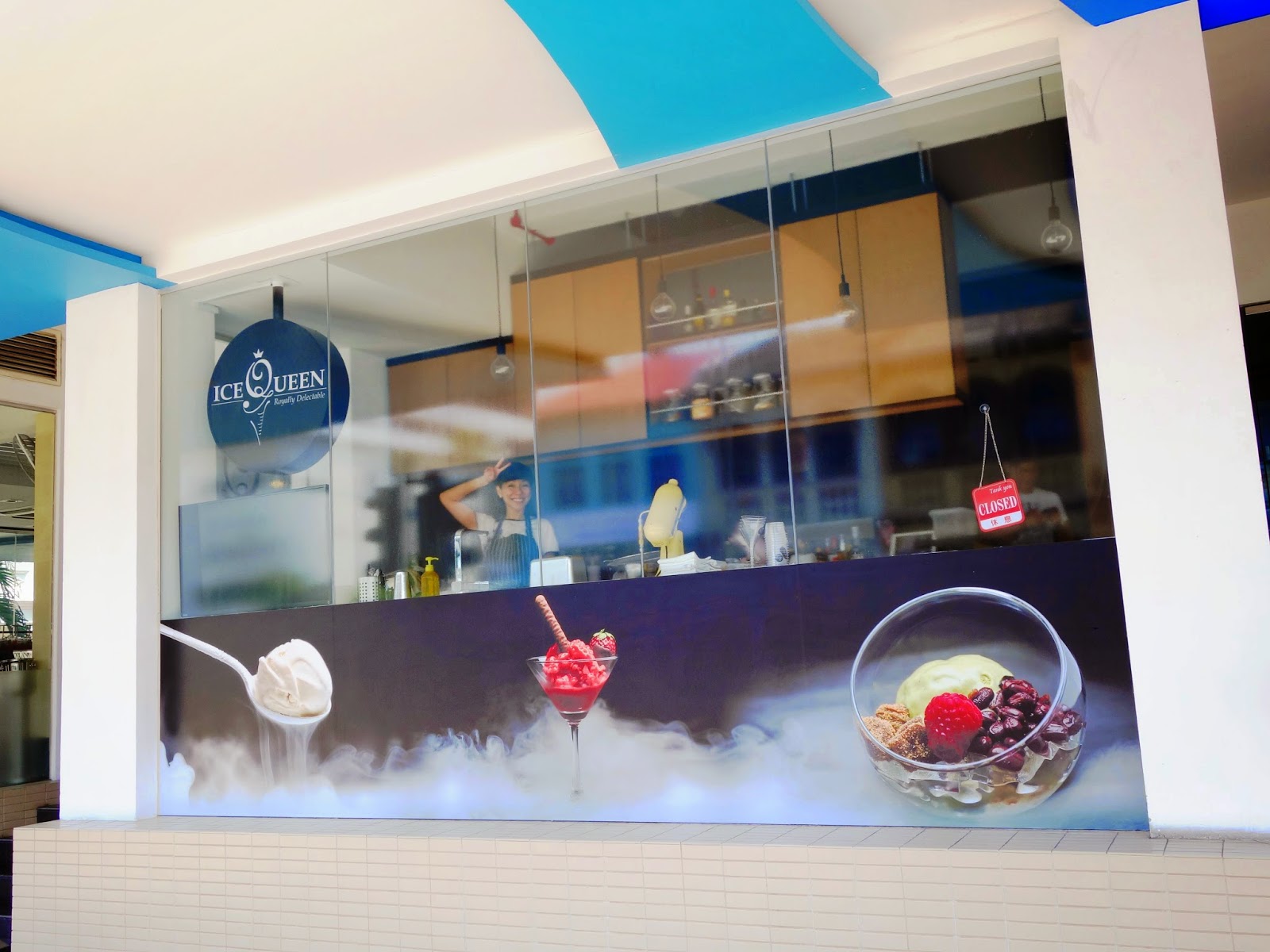 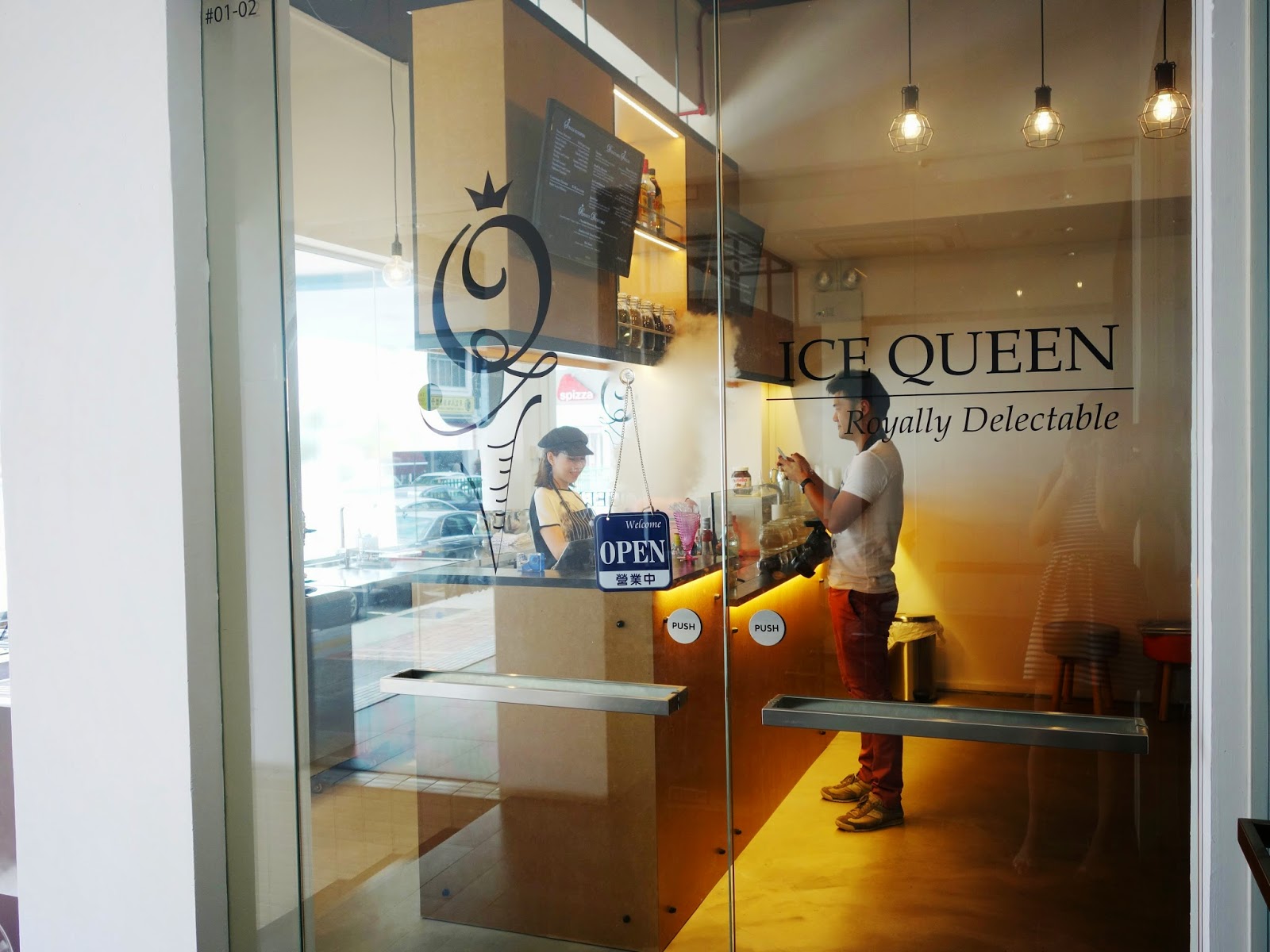 But be prepared to enjoy these lovely treats on one of the stools lined up against the wall, or take it for the road, as the ice cream parlour is currently still awaiting approval from the higher authorities for tables to be fitted in. Just a small inconvenience, I can overlook it. I'm there ultimately for their ice cream!

The pretty lady churning out the cold confection behind the counter is none other than the "ice queen" herself, owner Eelin Goh, who decided to leave her long-time finance world behind and pursue what she really wanna do: Serving up "royally delectable" ice cream fit for the royals. 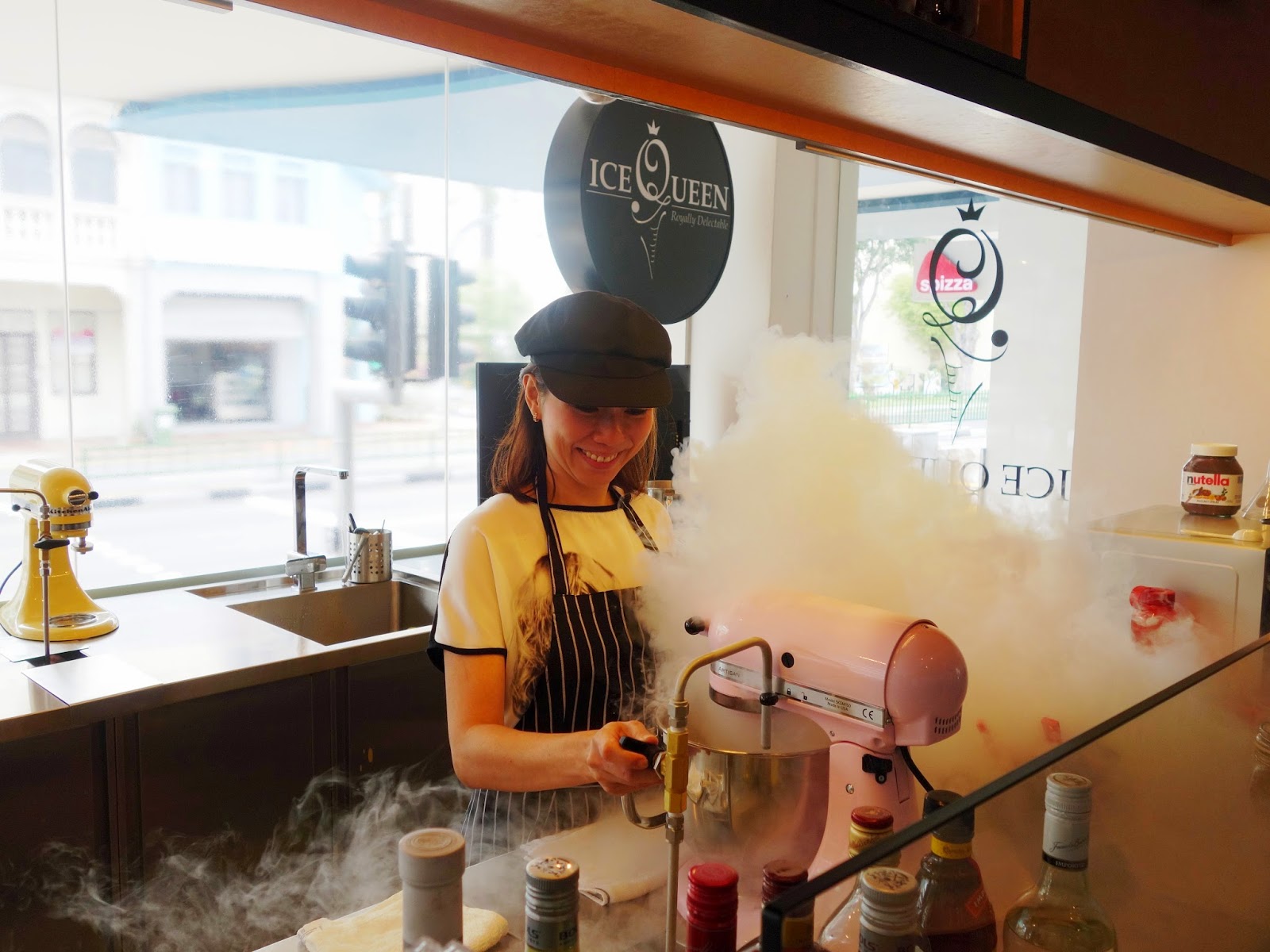 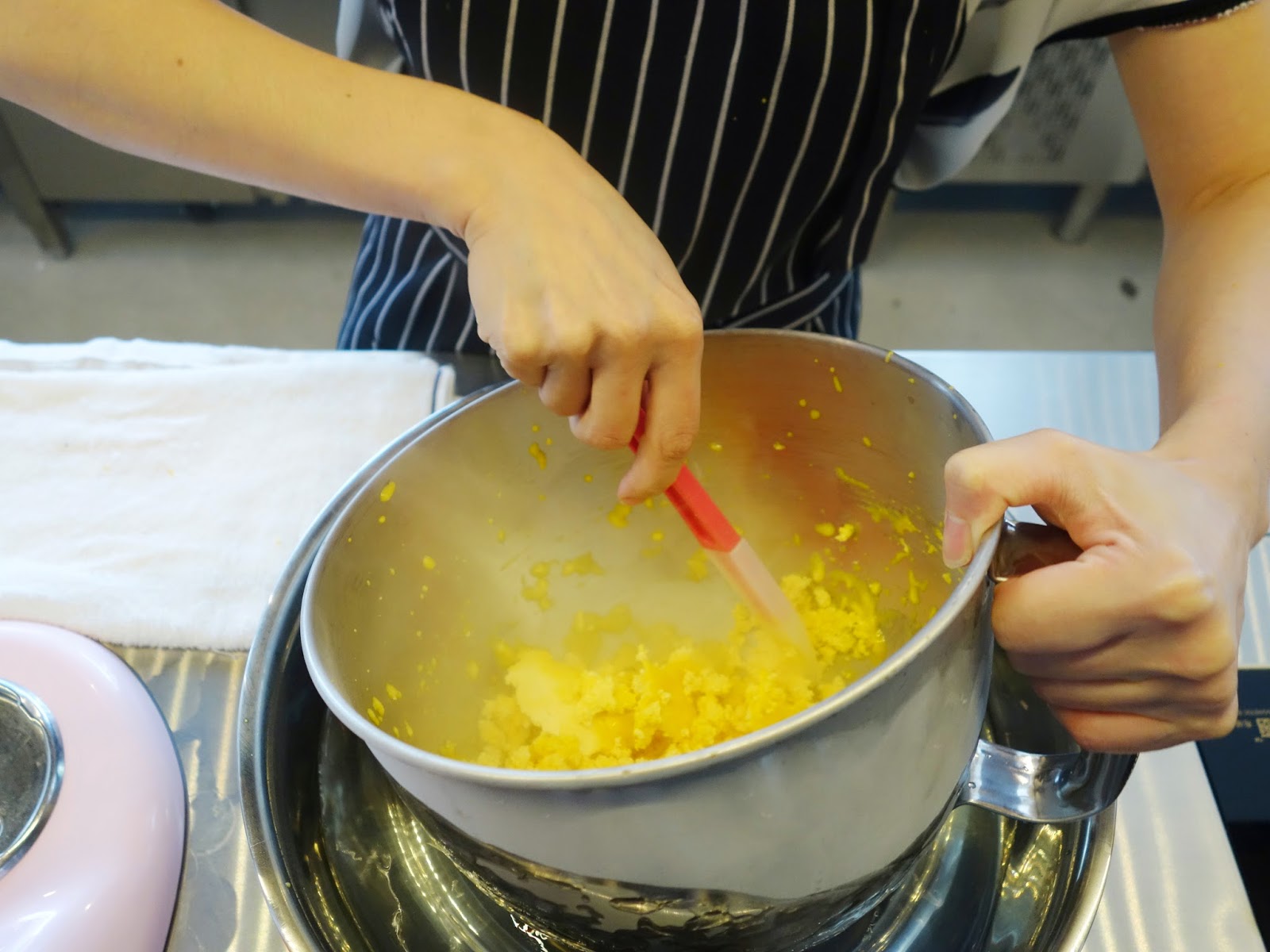 Why liquid nitrogen ice cream and not the traditionally made ones then? Because using liquid nitrogen to rapidly freeze the mixture causes fewer ice crystals to be formed, resulting in a smoother and creamier concoction.

Ooh yes, I'm already sold on that. There's nothing more yucky than those pesky icy bites which developed due to the longer freezing processes that most regular ice cream suffers from.

The use of liquid nitrogen also meant that any need for chemical ingredients such as stabilizers and emulsifiers is being eliminated.

Visually, it is also quite a theatrical sight as the instant freezing process creates an impressive cloud of vapour. We contributed some audio aspect to it with our "oohs" and "ahhs" and the clicking of cameras. 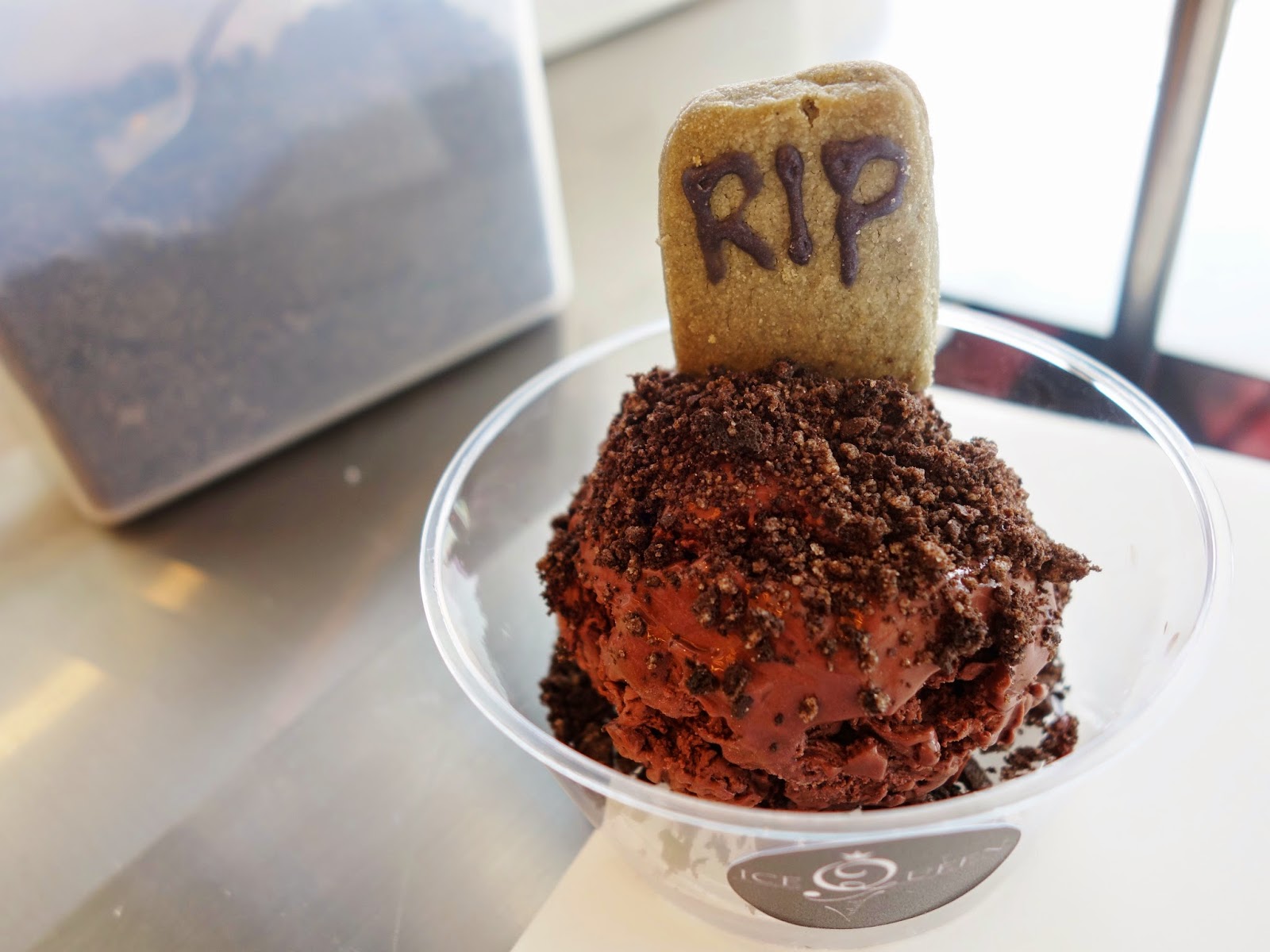 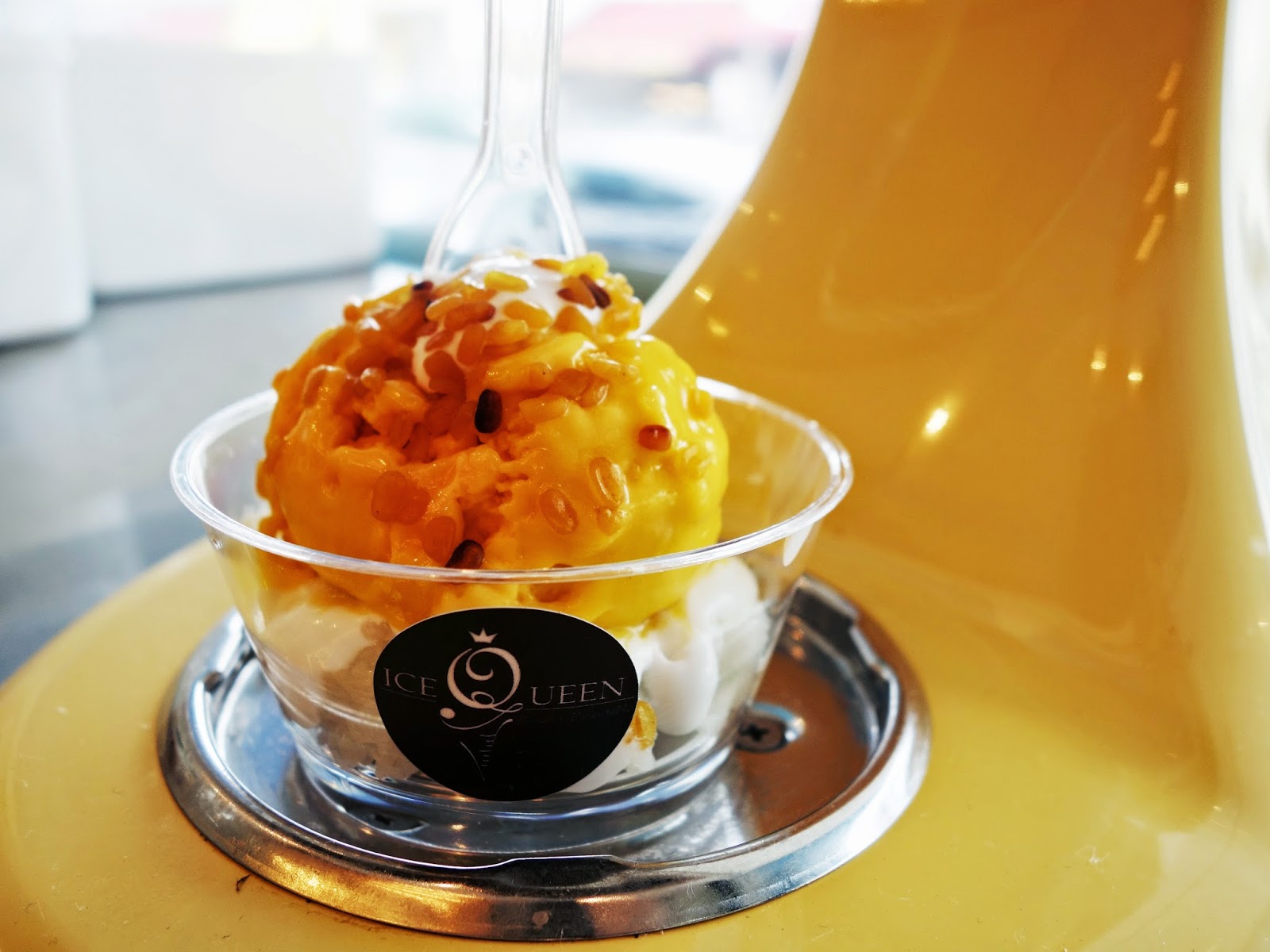 Premier flavours such as French Vanilla, Nutella, Hazelnut, Sea Salt Caramel, Strawberries & Cream goes for $4.90 per scoop, while alcohol infused ones such as the Chocolate Strawberry Margarita cost more at $9.90 per scoop. Still reasonable lah.

My order of Drunken Fresh Young Coconut Sorbet came looking very unphotogenic, just a dollop of plain snowy whiteness sitting on a lonely throne of plastic martini glass. But next thing I knew, I fell in love with its refreshing taste and bites of coconut shreds in every mouthful. The amount of Bacardi rum was just right, complementing the fruity taste of coconut without overpowering it.

But when at the Ice Queen, what you should really go for are their Delectably Specials ($6.50 per cup), ice cream paired with various toppings inspired by Eelin's favourite food and happy times. 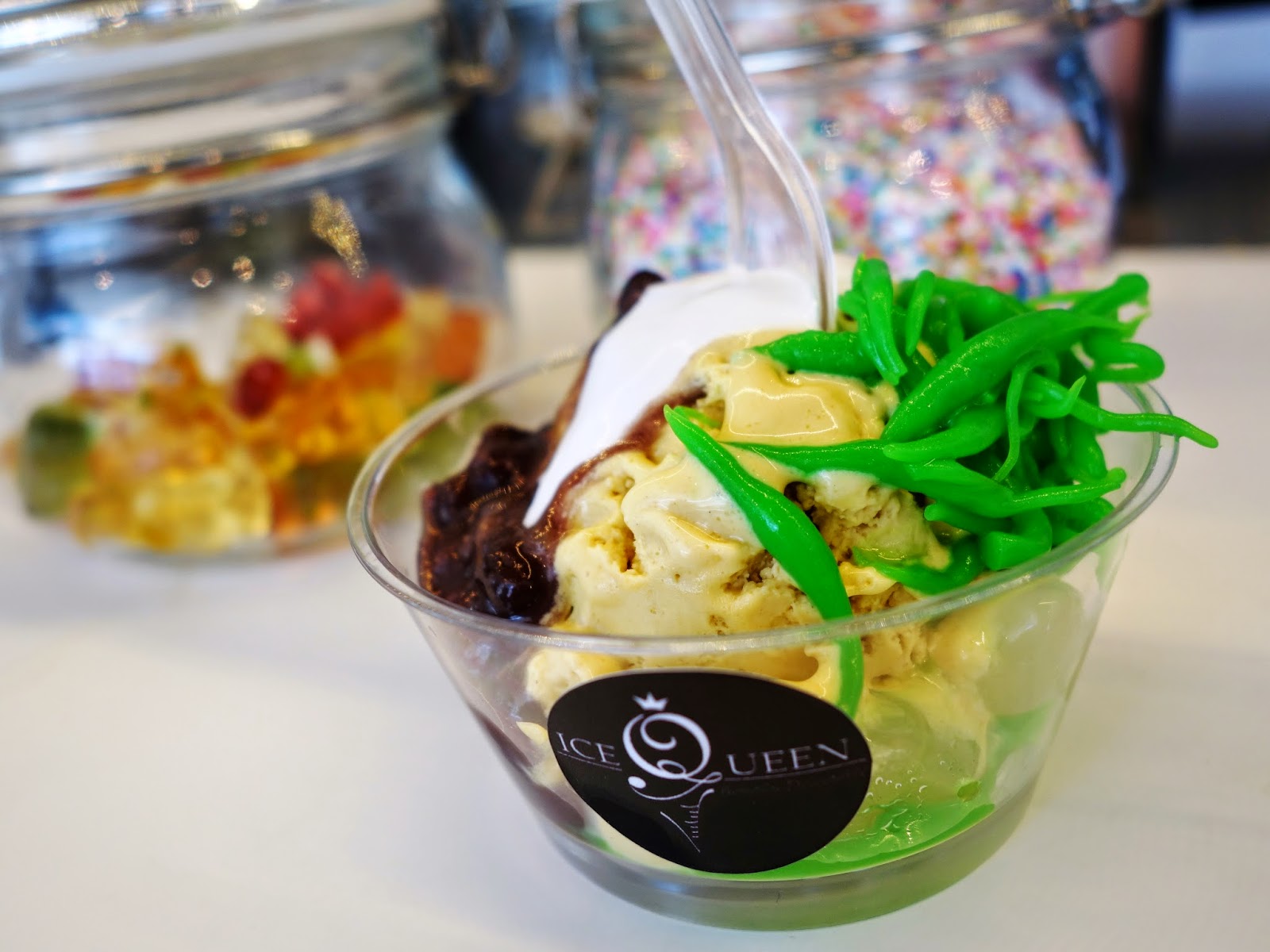 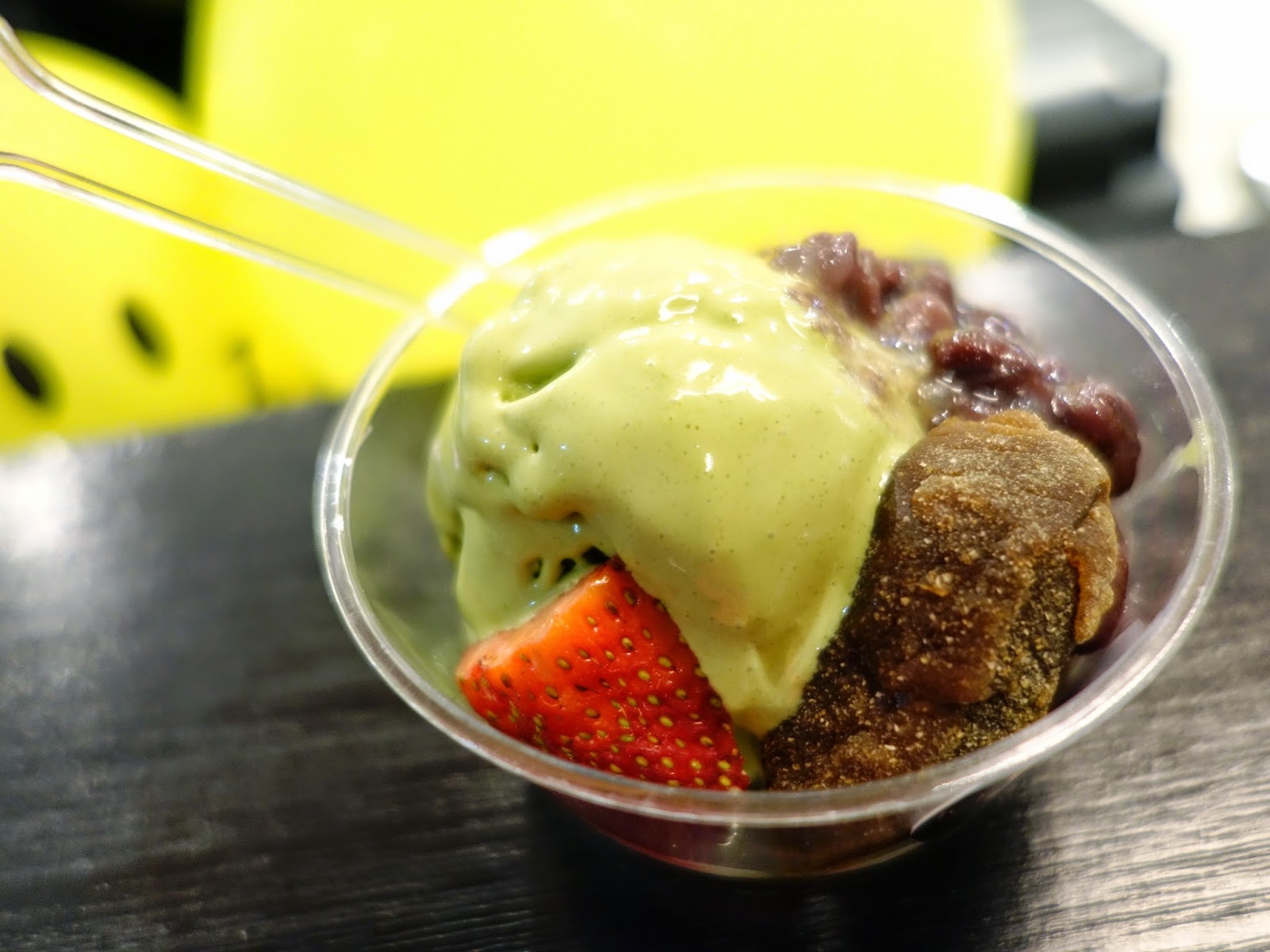 The liquid nitrogen ice cream's texture is indeed silky and creamy, though the matcha flavor erred a little to the milker side. We felt the salted gula melaka flavor can hold back a bit on its saltiness too.

My friend joked that "pantang" aka superstitious people cannot eat Death By Chocolate, a cup of rich Valrhona chocolate ice cream topped with oreo crumbs and finished off with a "RIP" butter cookie. Haha we are not "pantang" and was rewarded with its intensely rich chocolatey taste. A must-try for chocolate lovers. 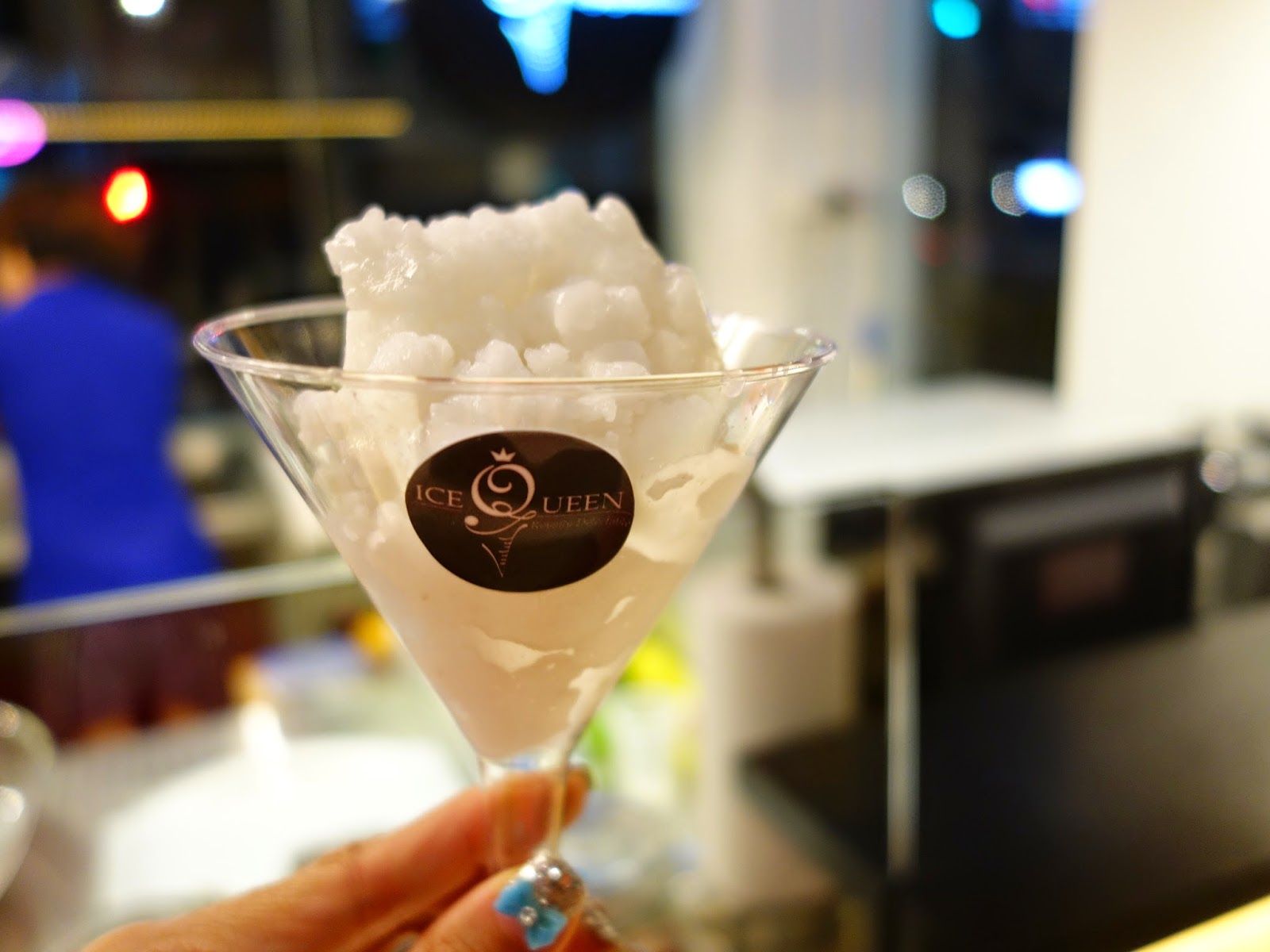 I would also highly recommend the Mango Sticky Rice, a combination of mango ice cream paired with glutinous sticky rice, coconut cream and fried mung beans. The nitrogen cream was so luscious, so lovely with the fresh sweetness of mangoes, and when eaten with the soft, evenly-cooked sticky rice, it tasted almost like the real Thai dessert. I think I've found my favourite at Ice Queen already. Come and look for yours  ♥♥♥


If you're unable to view the embedded version, please follow this link:
http://youtu.be/RuaAHvIJWFY