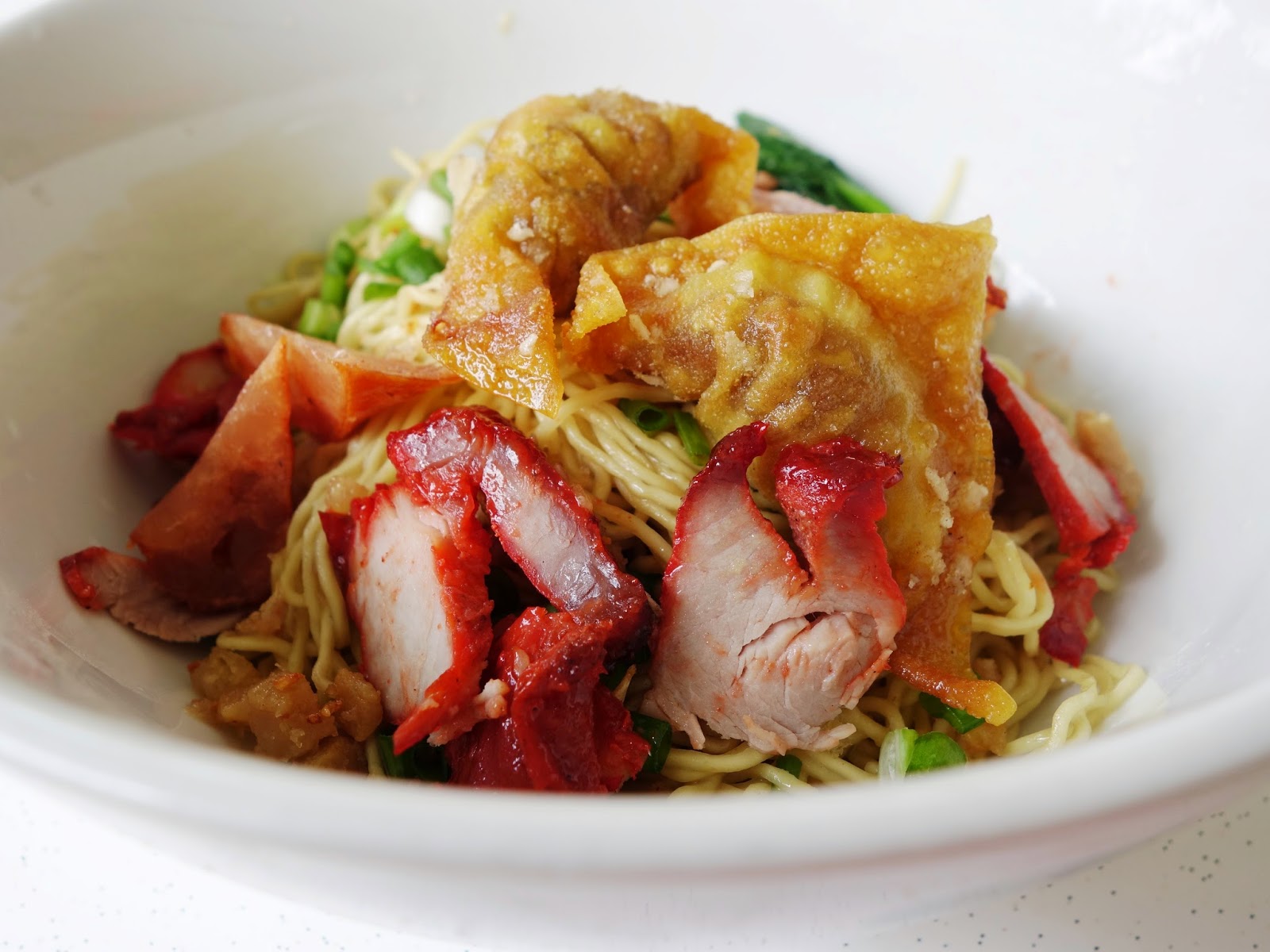 We all have our weaknesses for certain food. Mine is chicken wings, my friend's is wanton mee. When he heard that there is this stall called Soi 19 Thai Wanton Mee (十九街雲吞麵) located within an Ang Mo Kio coffeeshop selling noodles which is similar to the popular Sabx2 Pratunum Wanton Noodles in Bangkok, he wasted no time in jio-ing me to try it out together.

Operated by chef owner Mr Ng, a Singaporean who picked up the art of cooking wanton mee in Thailand, Soi 19 has already been satisfying local palates who miss the taste of Thai-style wanton noodles since two years ago. But it was only recently that the humble stall is thrown into the spotlight after a slew of media coverage. Since then, its queue is reputed to be unceasing from the moment the stall opens in the morning (7.30am), till it closes for the day in mid-afternoon (3pm). 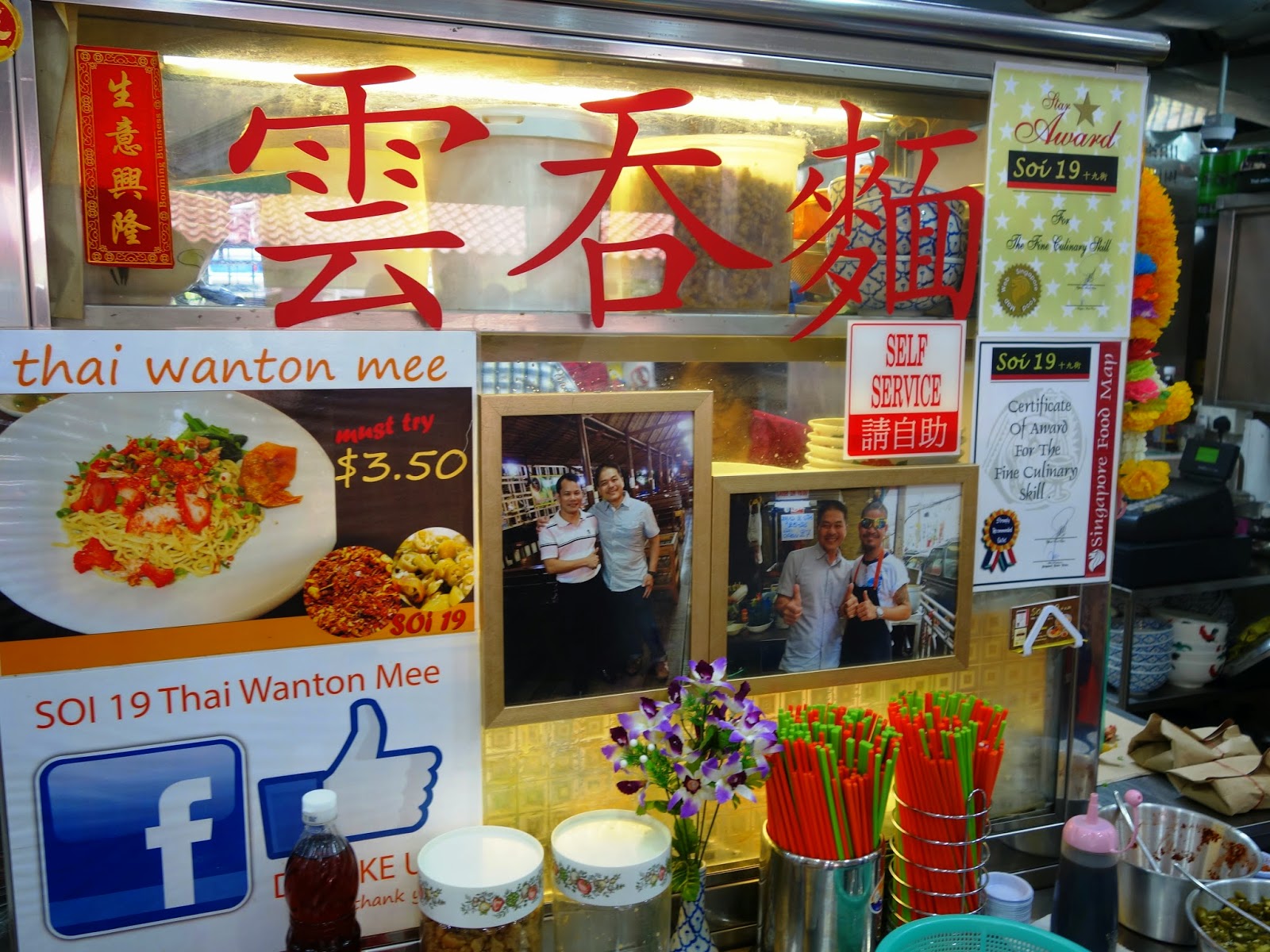 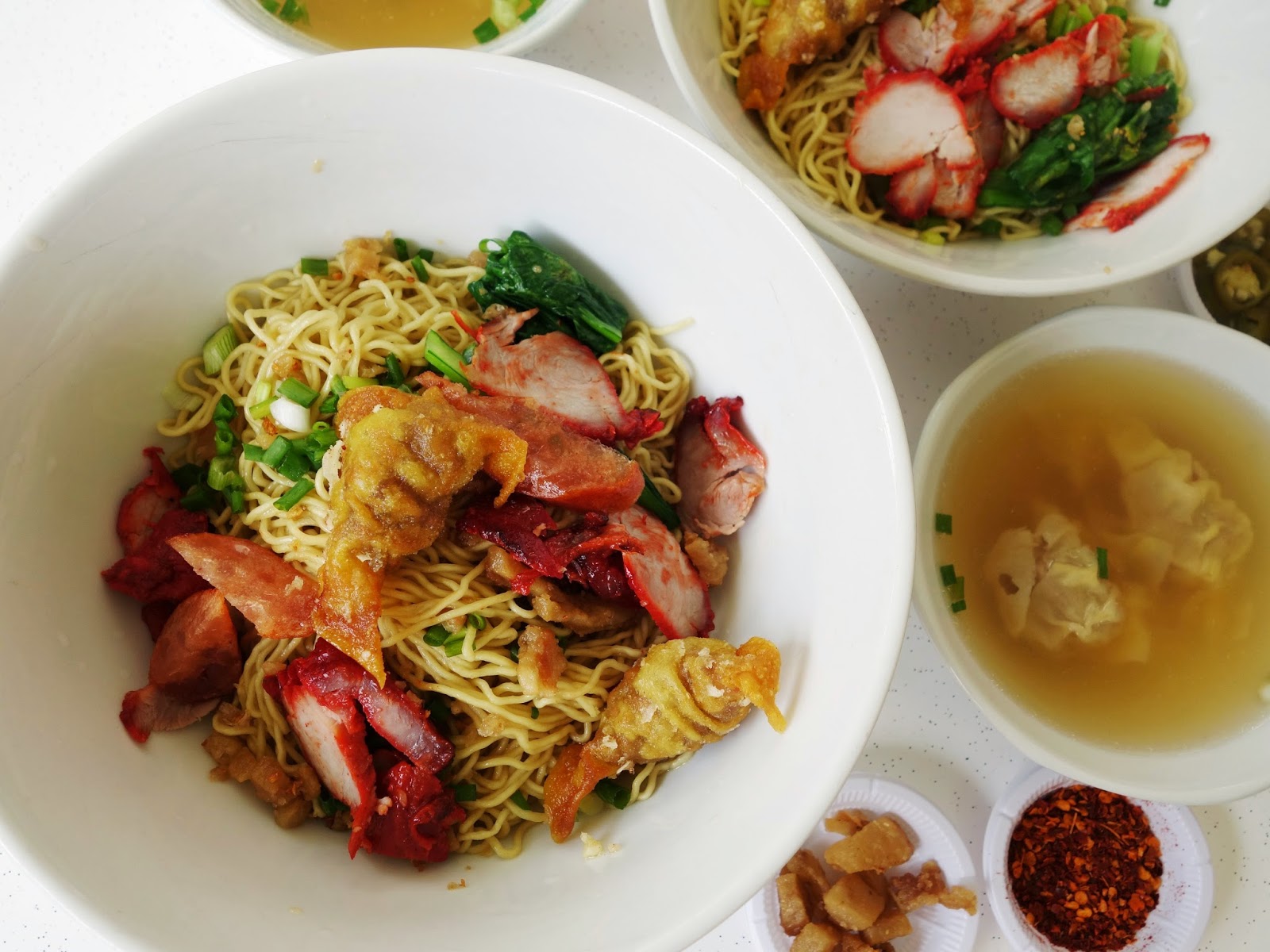 It may seem like a good strategy to arrive at 7.30am to avoid any crowd, but another friend ended up still having to queue for 30 minutes as there were people who came even earlier and were ordering takeaways in huge quantity. So, when we went on a Saturday during peak lunch hour, I was not surprised to be greeted by the long line of waiting customers. Blessed much to have my friend who uncomplainingly stood for an hour to get our noodles while I 'chope' a table. (Thank you!!!)

After waiting for an hour, we felt that we should just get the biggest bowl-size of noodles available to kind of mitigate the amount of time wasted. "More worth it lah", as some people might reasoned.

Each bowl of Wanton Mee is priced at $3.50 (small), $4 (medium) and $5 (large). I feel the small portion is sufficient for a regular serving of noodles with char siew (roasted pork), blanched vegetables, fried wanton (dumpling) and dumpling soup, but if your appetite prefers to have more noodles and additional ingredients such as sliced Chinese sausages, medium or large portion would be the heartier way to go. 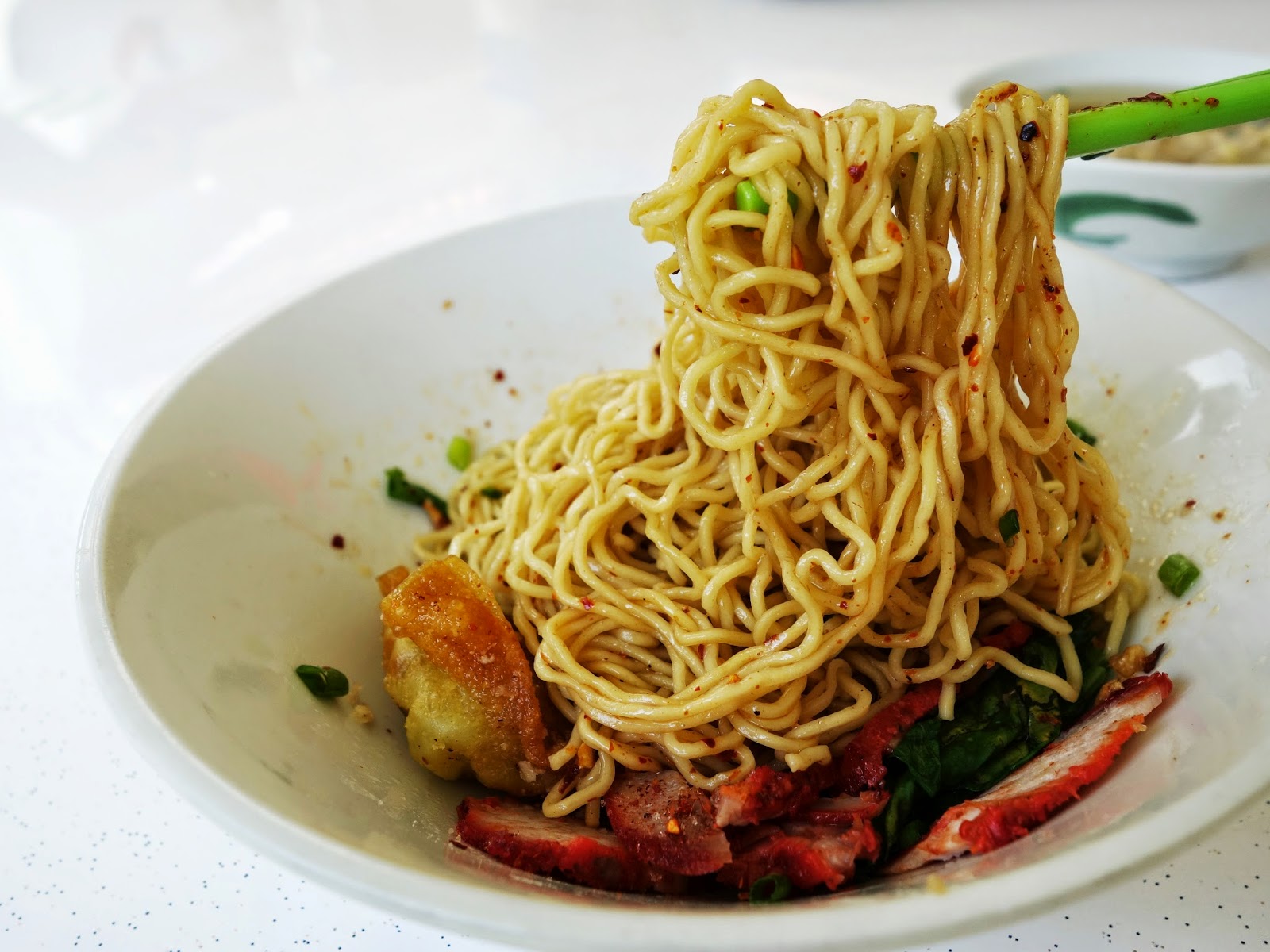 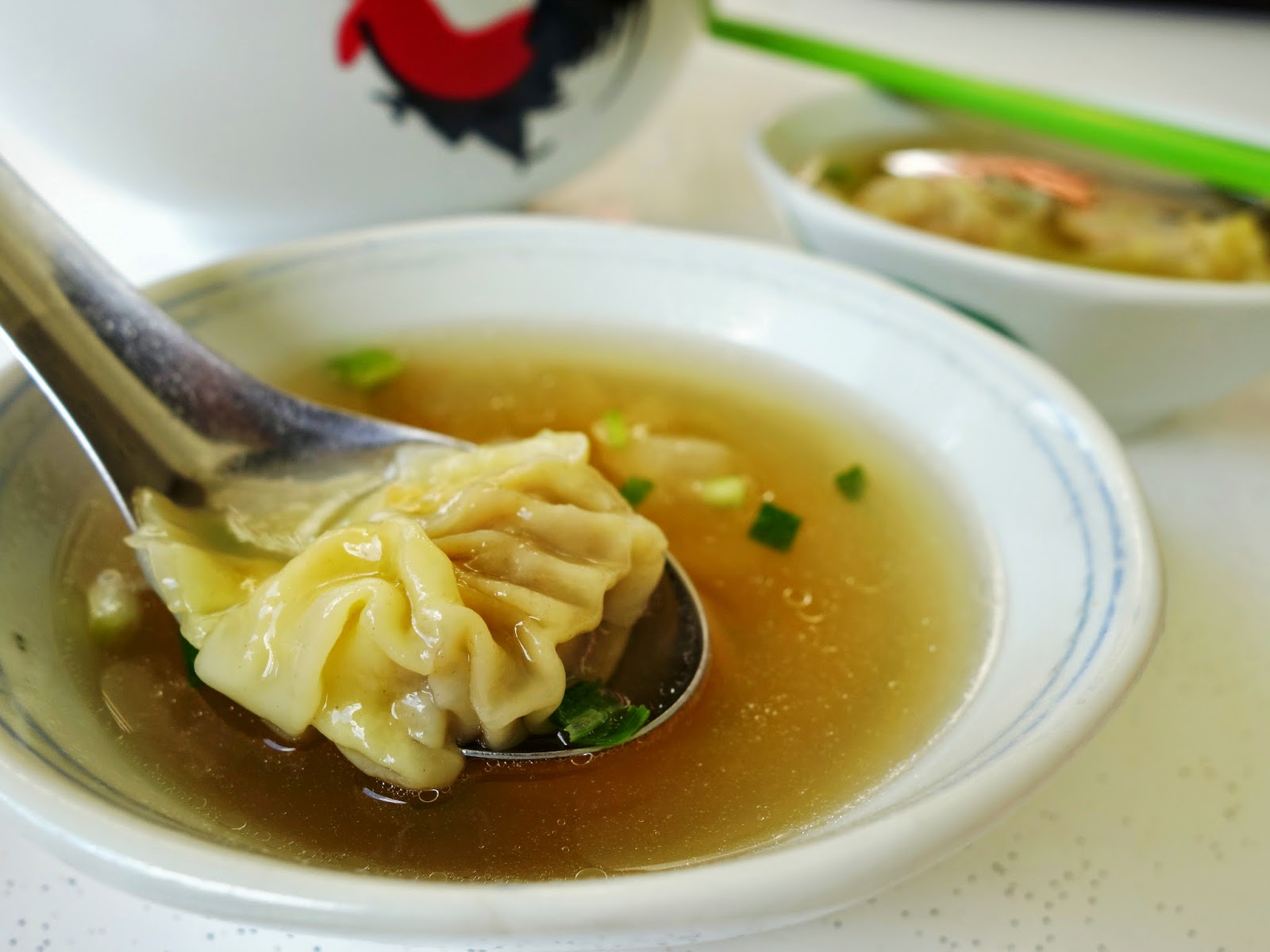 What differs the Thai-style wanton mee from our local version is the prominent lack of soy sauces and chilli drenching the noodles. Just lightly coated with pork lard, shallot oil and a bit of seasoning, the simplicity allowed the subtle eggy aroma of the noodles to take centerstage, and complemented its delightful springy texture exceedingly well.

To elevate the flavours further, I added in some condiments such as fish sauce, sugar and a generous shower of chilli flakes for some heat. Wah, the entire combination of savory, sweet and spicy became really power! There are also cut green chilli and crunchy lard croutons available which you can feel free to add into your bowl.

The accompanying slices of char siew was nowhere as tender, moist or thickly-cut as I would like it to be, but a bite into those succulent and meaty dumplings wrapped in silky smooth wanton skin had me forgetting the former's inadequacy in no time.

Another highlight was the crispy fried wanton. Its meat filling was well-marinated and tasty, and the inclusion of fragrant chopped onions within the dumpling itself came as hidden surprise. I wished I had taken a photo to show you, but sorry lah, couldn't stop myself in time before gobbling the delicious morsel down. 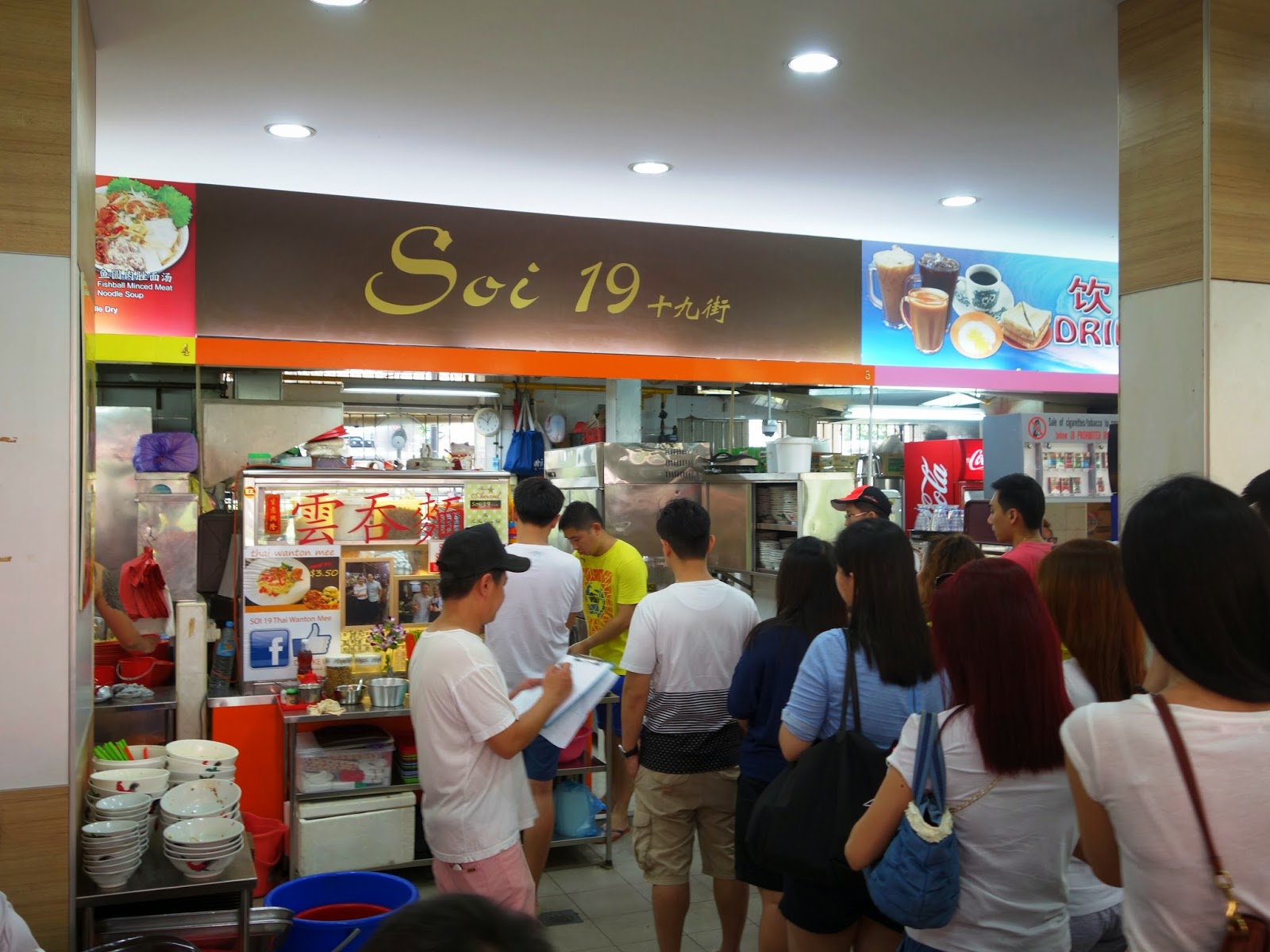 How does Soi 19 compare to Sabx2 Pratunum then? I can't answer this as I've not tried the latter, but my friend felt that the one in Bangkok is still better in terms of overall taste and most importantly, it does not leave a surfeit greasy afterfeel (I do find it a tad oily too).

Putting aside the comparison and whether it's Thai-style or not, the wanton mee at Soi 19 is definitely better than the average bowl of noodles. But would we queue another hour for this? Hmm... probably not. However, just as taste is a subjective matter, so is the debatable question of whether the time spent is worth it. Why don't you give it a try and share your thoughts with me?